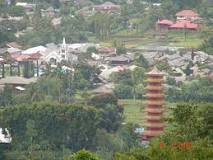 Tomohon City is one of cities in North Sulawesi province. Since a long time ago, the city has been written in some historical notes; one of them is in ethnographic work, Priest N. Graafland who wrote about a country namely Tomohon that was visited by him around 1850 by using Queen Elisabeth ship. Tomohon is one of regions which is included in Tombulu ethnic. This ethnic is one of 8 Minahasa ethnics. Through a long legal process and considerations in the framework of accelerating the nation's development for the welfare of society widely, the regional government of Minahasa along with Regional Representative Council of Minahasa recommended people’s aspiration to establish South Minahasa regency, Tomohon City and North Minahasa regency which is supported by North Sulawesi provincial government. The people of Tomohon City have customs and culture called ‘Mapalus’. Mapalus, which means working together and helping each other, has been rooted and entrenched among them. The culture is still preserved up today. The beautiful city is also called as the city of flower. Its fertile land makes almost all types of flower grow in the city. A village at Tomohon City also becomes the main tourism destination. It is ‘Bunga hamlet’. Bunga hamlet located at Kakaskasen village in North Tomohon district is the initial location of floriculture development of Tomohon City. From the center of Tomohon City, the distance is 3 kilometers to the Bunga hamlet. Surrounding area of the village, there are many hotels and resorts with beautiful view where there are two volcanoes: Lokon and Mahawu. At this location, you can see and enjoy various kinds of potted ornamental plants and also flowers which are managed from generation to generation and placed at kiosks and also offered to visitors. Growing or selling the flowers is the way to earn a living for the local people.