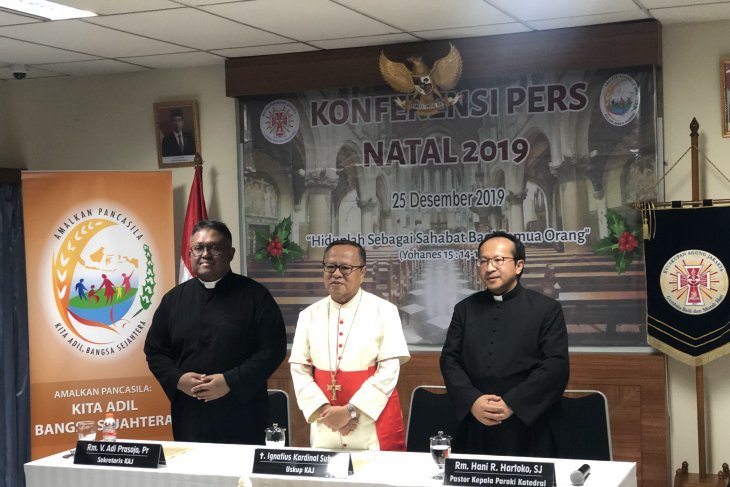 Bishop of the Jakarta Archdiocese, Cardinal Suharyo, believes that the message of “living as friends to everyone” aims to thwart the rise in hatred stemming from a depleting sense of togetherness among Indonesians. Suharyo pointed to three indications of hatred, intolerance, and identity politics marking the start of diminishing togetherness in society and often observed in friendships and relations. "Those are the signs that the sense of togetherness is diminishing among the people as citizens of a country. Such words did not exist 10 years back, thereby translating to the fact that the problem was not as prevalent as it is now," he stated at Jakarta's Cathedral Church, Wednesday. He highlighted the need for a way out and was optimistic that the 2019 Christmas celebrations would offer a momentum to trounce over hate speeches, intolerance, and identity politics. This year's Christmas celebration themed, "Live as Friends to Everyone," serves as the initial steps to restore optimism and togetherness among the people. "Live as friends for everyone to fight the flow of hate speech, the current of intolerance, and the surge in identity politics," he emphasized. In light of the Christmas celebrations, the Jakarta Cathedral Church held four mass services at 7 a.m., 9 a.m., 11 a.m., and lastly at 5 p.m. local time. Jakarta's Cathedral Church Archdiocese Public Relations division has projected that some eight thousand people in total had participated in all four mass services. (ANTARA. (ANTARA)