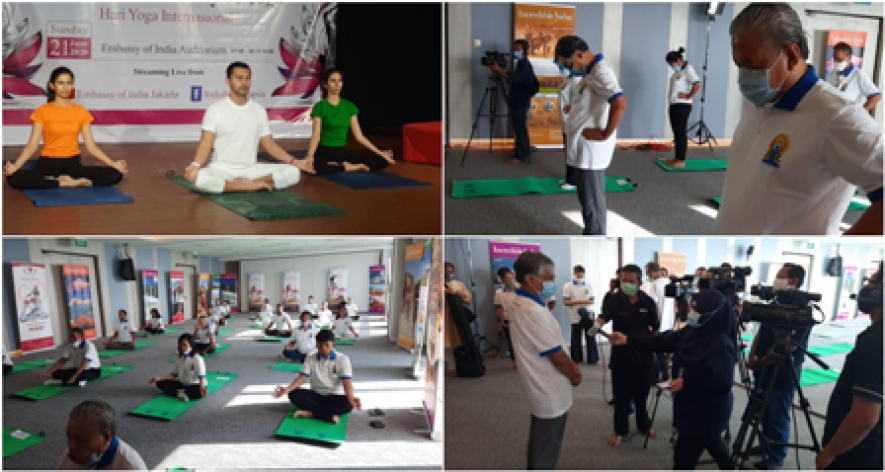 The United Nations adopted June 21 as the International Day of Yoga on December 10, 2014. To commemorate the milestone, since then, a series of activities are being organised across the globe to celebrate Yoga, the ancient wisdom of holistic health and well-being. Millions of people participate in these activities which include world leaders, international celebrities, spiritual gurus, writers, artists and persons from every walk of life. This year, due to Covid-19 pandemic, organisation of such large-scale activities was not feasible. Accordingly, a series of activities were organised to commemorate the 6th International Day of Yoga (IDY) with the help of digital technology. Embassy of India in Jakarta in association with Indian Cultural Centres in Jakarta and Bali and its Consulates in Medan and Bali, organised an online Yoga Quiz Competition. 20 selected participants were given special certificates of appreciation among which three highly knowledgeable yoga enthusiasts were awarded special prizes. Ministry of AYUSH of India organised a global Yoga Blogging Competition in which several Indonesian nationals also participated. As a precursor to the main event on June 21st, a video conference was held on June 12 wherein Ambassador Pradeep Kumar Rawat interacted with the Yoga practitioners across Indonesia. The conference was also attended by the Chairman, FORMI (Federation of Sports and Recreation Activity, Indonesia) and former Minister of Sports of Indonesia, Hayono Isman. Ambassador congratulated Yoga lovers of Indonesia on the establishment of Association of Yoga practitioners in Indonesia (PPYNI) terming it as an important milestone. (Release Embassy of India)