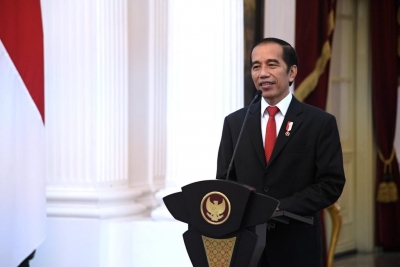 The President when delivering a virtual speech in the open session of the 100th Anniversary of the Technical Higher Education Journey in Indonesia, Friday (3/7) (foto : setkab.go.id)

President Joko Widodo (Jokowi) believes Indonesia's financial status upgrade to "upper middle income country," from "lower middle income," according to the World Bank’s announcement should be an opportunity to emerge from "the middle income trap".
"This status upgrade is one aspect that we should grateful for and treat as an opportunity for moving forward, taking an advanced leap as we strive to become a 'high income country' as well as getting out from the 'middle income trap',' Jokowi emphasized.
The World Bank's announcement on July 1 cited that Indonesia’s gross national income per capita had increased to US$4,050, from $3,840.

This status upgrade is also a notable starting point for Indonesia to later become a developed nation, Adi Budiarso, an official of the finance ministry, remarked at another occasion, adding that the country essentially looks forward to what to fight for in order to be in that position.

Budiarso perceives that the challenge ahead of huge concern is boosting Indonesia's competitiveness, as it is ranked 50th worldwide, falling from 45th last year, according to the Global Competitiveness Index (GCI).  (ANTARA)

More in this category: « President Calls for Greater Synergy, Cooperation between Police, KPK COVID-19 Recovery Rate in Indonesia's 11 Provinces has Exceeded 75 Percent »
back to top
Home