Indonesian Economy is in Better Shape than Other Countries: Minister 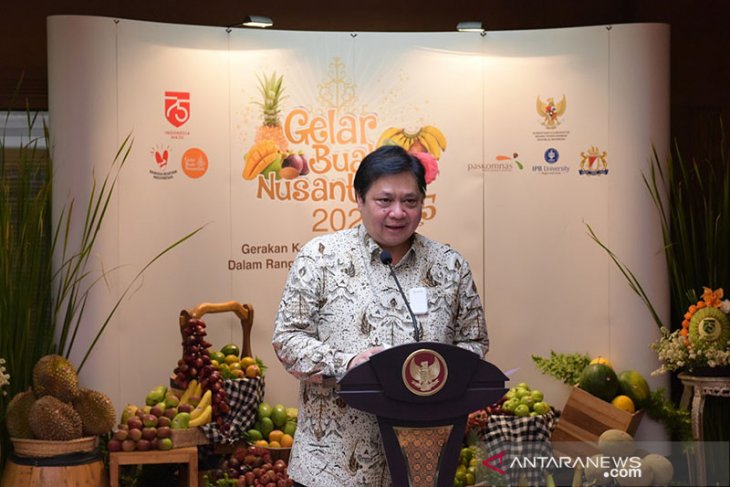 Coordinating Minister for Economic Affairs, Airlangga Hartarto, during the launch of the 5th National Fruit Event in Jakarta on Monday (August 10, 2020). (ANTARA/HO-Kemenko Perekonomian/pri)

Despite contracting 5.32 percent year-on-year (yoy) in the second quarter of 2020, the Indonesian economy is still in a better condition compared to several other countries, Coordinating Minister for Economic Affairs, Airlangga Hartarto, said.“The Indonesian economy last contracted 5.32 percent (in Q2 2020). The contraction also affected other countries. But, Indonesia is still relatively better than other countries that fell deeper (into economic decline),” he said during a discussion in Jakarta on Tuesday.He said some other countries have suffered a deeper contraction, with the British economy shrinking by up to 19.9 percent, the Hong Kong economy contracting 12 percent, the Singapore economy falling 12.6 percent, and the Indian economy slumping 18 percent.The third quarter of 2020 offered a significant momentum for the Indonesian economy to rebound, he said.To that end, the realization of government spending must be able to support the national economy in the third and fourth quarters so that it grows as targeted this year, he remarked.“We must see the third quarter as an important moment so government spending can support economic growth in the third and fourth quarters,” he said.In addition, the government must also encourage household consumption, which contracted up to 5.51 percent in the second quarter, and so that it contributes significantly to the national economy, he said.“As we know household consumption is the main contributor of the Indonesian economic growth. Therefore, market confidence and a safe market are the main priority during this period of time,” he explained.He noted that several sectors still grew positively in the second quarter in spite of the COVID-19 pandemic. They were the agricultural sector, which grew 2.19 percent; information and communication sector, which expanded 10.88 percent; and, the financial services sector, which grew 1.03 percent.Several sectors also have shown signs of improvement since June, 2020, including consumer confidence index which rose to 83.8 points in June from 77 a month earlier. (ANTARA)