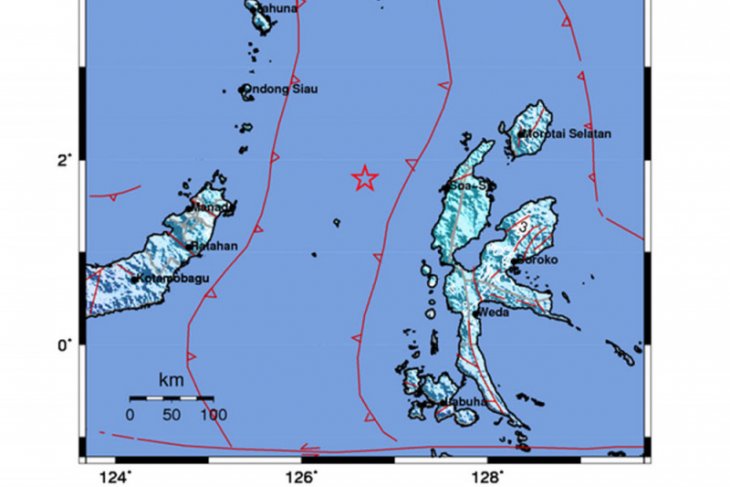 The epicenter of the 5.9 magnitude earthquake in West Halmahera, North Maluku. (ANTARA/HO-BMKG)

A 5.9-magnitude earthquake jolted northwest of West Halmahera District in North Maluku Province on Sunday morning but no tsunami alert was issued.The epicenter of the quake that occurred at 07.21 a.m local time was located around 112 kilometers away from the district area at a depth of 10 kilometers, the Meteorology, Climatology, and Geophysics Agency (BMKG) revealed.Earthquakes regularly rock various parts of Indonesia due to the fact that the country lies on the Circum-Pacific Belt, also known as the Ring of Fire, where several tectonic plates meet and cause frequent volcanic and seismic activities.On Aug 24, 2020, for instance, a 5.2-magnitude earthquake rocked Pangandaran District in West Java Province but no tsunami alert was issued.One of the deadliest earthquakes in Indonesia that occurred over these past two years was the one that struck several areas of Central Sulawesi Province.The 7.4-magnitude earthquake which was followed by tsunami that hit the areas of Palu city and the districts of Donggala, Paringi Moutong, and Sigi on Sept 28, 2018, claimed 2,102 lives, injured 4,612, and rendered 680 others missing.A total of 68,451 homes were seriously damaged, and 78,994 people were displaced.Due to a large number of rotting corpses, the authorities and humanitarian workers decided to bury them in mass graves.Meanwhile, material losses inflicted by the twin deadly disasters were estimated to reach Rp15.29 trillion.The provincial capital of Palu took the brunt of the disaster, with material damage and losses recorded at Rp7.6 trillion, or 50 percent of the total estimate, according to the National Disaster Mitigation Agency (BNPB).The material damage and losses in Sigi district were recorded at Rp4.9 trillion, or 32.1 percent, Donggala district at Rp2.1 trillion, or 13.8 percent, and Parigi Moutong district at Rp631 billion, or 4.1 percent.The material damage in the four affected areas reached an estimated Rp13.27 trillion, while the material losses reached approximately Rp2.02 trillion, the agency revealed in October 2018. (ANTARA)