Indonesia Fights For Resolution On Rohingya Aid at AIPA Meeting 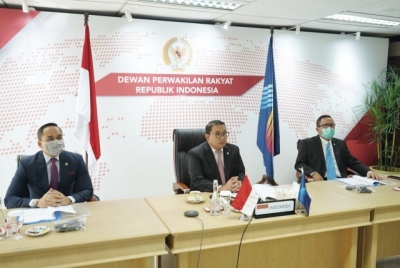 Indonesian parliamentary delegation pushed for resolutions on regional stability in the South China Sea amid the global pandemic and humanitarian aid for the Rohingyas of Rakhine State, Myanmar at an ASEAN forum on Wednesday.

The Indonesian delegation fought for the approval of resolutions drafted on the two issues at the 41st General Assembly of the ASEAN Inter-Parliamentary Assembly (AIPA), which was held online.

The Indonesian delegation was headed by the chairman of the Inter-Parliamentary Cooperation Committee of the House of Representatives (DPR), Fadli Zon. He was accompanied by his deputy, Putu Supadma Rudana, and delegation member Didi Irawady Samsudin.

At the meeting, Fadli Zon argued that the draft resolution on regional stability and peace was important to strengthen ASEAN's inter-parliamentary cooperation for handling the spread of the novel coronavirus outbreak and its tremendous socio-economic impacts.

The Indonesian delegation also brought up another draft resolution on humanitarian aid for the Rohingya people in Myanmar.

Speaking on the issue, Fadli Zon deplored the Parliament of Myanmar's refusal to the DPR's proposal for AIPA support for agreements reached by the governments of ASEAN member countries on the Rohingya issue.

He argued that the problems related to the Rohingya people in Rakhine State had triggered a spillover effect on the Southeast Asian region, such as the arrival of people by boat from Myanmar's Rakhine State amid the pandemic situation.

Indonesia and many other countries are paying serious attention to the “boat people” issue, he said. Therefore, support for Myanmar to provide humanitarian aid and a guarantee for conducting peaceful and humanist repatriation of the Rohingya refugees are important, he added.

Regarding the humanitarian issues related to the Rohingya people, Fadli Zon revealed that this year's AIPA's General Assembly would not pass any resolution if the assembly's political commission fails to reach a consensus on the DPR's proposals.

On June 24, 2020, three Acehnese fishermen had rescued 99 Rohingya migrants on humanitarian grounds after their boat got stranded in the waters off Seunuddon, North Aceh.

The High Commissioner for Refugees (UNHCR)-Indonesia Office had officially granted refugee status to the 99 Rohingya migrants, according to Indonesian Foreign Minister Retno Marsudi in her press statement in July this year. (ANTARA)