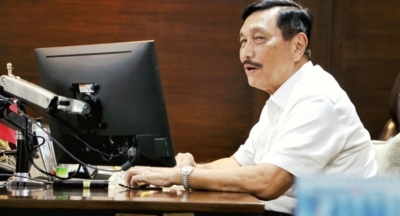 Handling Covid-19 will be concentrated in nine provinces with the highest cases.

"The President orders that within two weeks we must be able to achieve three targets, which are reducing the number of daily cases, increasing the recovery rate and reducing the mortality rate," coordinating minister for maritime affairs and investment Luhut B. Pandjaitan said in a virtual conference with the Regional Heads of the nine provinces.

He said there are at least three strategies to achieve the target of handling Covid-19 transmission in the nine main provinces.

"The justici operation is for enforcing the discipline of the Health protocol, improving the management of Covid-19 patient care to reduce the mortality rate, and increasing the recovery rate and specifically handling the Covid-19 clusters in each province," Luhut said.

"We have to carry out justici operations to enforce health protocol implementation because if we don't take hard action against the violators, then the condition will not improve," he said.

Luhut emphasized that in the next two days, technical meetings with all provinces would be held intensively.

"I ask each province to sharpen its strategy, it has to be clear about the division of tasks who do what and we deploy all the resources we have," Luhut said.

Meanwhile, the coordinating minister for politics, law, and security affairs Mahfud MD said the need for amendments to the Governor Regulation , Regent Regulation, or Mayor Regulation, to become Regional Regulations so the police can prosecute criminal rules to violators.

"Justisi operation is related to criminal law enforcement, while according to the Law, we do not allow criminal sanctions," he explained.

"But if the police want to carry out a criminal sentence outside the Governor Regulation, it is possible. For example, using Law No. 4 of 1984 on Communicable Disease Outbreaks," he advised.

By using this law the police can prosecute offenders with the threat of imprisonment of up to one year and/or a fine of up to Rp1 million.

For information, as of today, the Justisi operation is being conducted simultaneously in the nine provinces.
There were several provinces that had previously implemented justisi operations to crack down on violators of the Covid-19 protocol before President Joko Widodo's order was issued today. These provinces include Jakarta, Central Java, East Java, and North Sumatra. (RRI)

More in this category: « The President Urges Jakartans To Comply With Health Protocols VP Encourages Diplomacy By Students Abroad »
back to top
Home