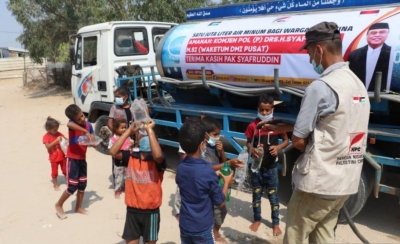 The Indonesian Mosque Council (DMI) amid the COVID-19 pandemic donated one million liters of clean water to residents of Gaza, Palestine who are hit by an economic crisis due to the lockdown in the region.

"The drinking water assistance comes from a philanthropist from Indonesia, namely from the Deputy Chairperson of the Central Indonesian Mosque Council who is also a former Deputy Chief of Police of the National Police, Comm. Gen. Pol. H Syafruddin,"

Abdillah Onim, an Indonesian volunteer who is also Chair of the Nusantara Palestine Center (NPC) Social and Humanitarian Institute said in Gaza, on Wednesday.

He said NPC as a philanthropic NGO that cares for the humanitarian sector in Palestine was entrusted with delivering the clean water aid from Syafruddin to Gazans.

NPC has a head office in Kramat Jati, Jakarta and has a working team in the center of Gaza City, in Gaza, Jordan, Jerusalem, and the West Bank.

Onim explained that the Gaza Strip covers an area of ​​367 square km, with a population of 2,000,000, of which 87 percent live below the poverty line. Their livelihood is reliant on help from donor countries, especially assistance from the Indonesian people.

Poverty has been rampant in the region since 2007 where the main cause is the blockade (siege) imposed by the Israeli authorities, plus the current COVID-19 pandemic. The situation of Gazans has worsened because of the lack of humanitarian assistance for them.

"The drinking water assistance from the Deputy Chairperson of the Indonesian Mosque Council, Mr. Syaruddin, is a breath of fresh air for Gaza civilians in every corner of the village," Onim said.

Palestinian Muslim resident in Gaza Um Ahmad (57) from Deir Balah, Central Gaza expressed his gratitude for the aid of one million liters of drinking water.

"The water content in Gaza is 97 percent unfit for consumption. Thank God, we can drink clean water thanks to Mr. Syafruddin's generosity," he said. (Antaranews)

More in this category: « VP Encourages Diplomacy By Students Abroad Over 140 Companies Plans To Invest in Indonesia »
back to top
Home