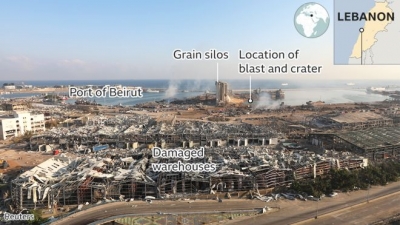 The blast that devastated large parts of Beirut in August was one of the biggest non-nuclear explosions in history, experts say.

As reported by BBC.com on Monday, the Sheffield University, UK, experts team said the best estimate for the yield is 500 tons of TNT equivalent, with a reasonable upper limit of 1.1 kilotons. This puts it at around one-twentieth of the size of the atomic bomb dropped on Hiroshima, Japan, in 1945.

The team mapped how the shockwave propagated through the city. The group hopes its work can help emergency planners prepare for future disasters.

"When we know what the yield is from these sorts of events, we can then work out the loading that comes from that. And that tells us how to construct buildings that are more resilient," Dr. Sam Rigby from Sheffield's Blast and Impact Engineering Research Group stated

"Even things like glazing, in Beirut, glazing damage was reported up 10km away from the center of the explosion, and the research Group knows falling glass causes a lot of injuries," he said.

The 4 August explosion was the result of the accidental detonation of approximately 2,750 tonnes of improperly stored ammonium nitrate. The blast led to some 190 deaths, as well as more than 6,000 injuries. (BBC)

More in this category: « Debt Cancellation Needed To Help Poorest Countries: World Bank WHO Says 1 in 10 People Might Have Covid-19 »
back to top
Home