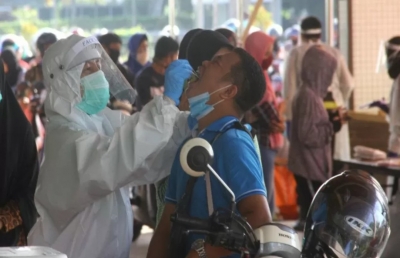 A man getting PCR test in Banjarmasin, East Kalimantan.

World Health Organization (WHO) stated that about one in 10 people might be infected with the Coronavirus (COVID-19). This makes a large part of the world's population vulnerable to the COVID-19 disease caused by this deadly virus.

As reported by Channel News Asia, Tuesday, WHO emergencies expert, Mike Ryan, said that the Corona pandemic has soared in several Southeast Asian countries, as well as increasing in parts of Europe and the East Mediterranean region.

"Our current best estimates tell us about 10 percent of the global population may have been infected by this virus. It varies depending on the country, it varies from urban to rural, it varies depending on groups. But what it does mean is that the vast majority of the world remains at risk. We are now heading into a difficult period. The disease continues to spread,” Mike Ryan's statement was delivered while giving an explanation to the WHO Executive Board in which the United States (US) launched a covert attack to China for what he called a failure to provide accurate and timely information about Corona.

WHO and other experts claimed that the Coronavirus, which is believed to have emerged on a food market at Wuhan city, China late last year, came from animals. WHO deployed a number of its experts on an international mission to China to investigate the origins of the Coronavirus, for being considered by Chinese authorities.

US Assistant Secretary of Health, Brett Giroir, stated that it was imperative for the 194 WHO member countries to receive regular and timely developments so that all countries can be involved in the process and have confidence in the results.

Germany, speaking for the European Union, said that an expert mission has to be deployed immediately, while Australia supporting a swift investigation.

Meanwhile, Russia's Deputy Health Minister, Alexandra Dronova, called for an evaluation of the legal and financial impact of the US government announcing its effective exit from WHO in July next year. (CNA)

More in this category: « Beirut Blast Was 'Historically' Powerful US Warns China Against Taiwan Attack, Stresses US 'Ambiguity' »
back to top
Home