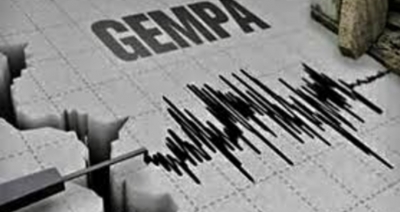 A tectonic earthquake measuring 5.0 magnitude rocked the West Aceh Regency and its surroundings on Thursday (15/10/2020) at 11.59 WIB.

The Meteorology, Climatology and Geophysics Agency (BMKG) of Mata Ie Aceh Besar Geophysics Station said that this shallow earthquake had no potential for a tsunami.

"The results of the BMKG analysis show that this earthquake has a parameter update with a magnitude of M = 5.0. The epicenter of the earthquake is located at coordinates 4.02 North Latitude and 95.89 East Longitude, or precisely located at sea at a distance of 30 km southwest of Meulaboh City, Aceh Barat Regency, Aceh at depth of 54 km, "said Head of BMKG Mata Ie Aceh Besar Geophysical Station, Djati Cipto Kuncoro in his statement in Banda Aceh.

He explained that the type and mechanism of the earthquake by paying attention to the location of the epicenter and the depth of the hypocenter is a type of shallow earthquake due to subduction activity.

"The results of the analysis of the source mechanism show that an earthquake has a thrust fault mechanism," he said.

"If during the day it is felt by many people in the house," he said.

"Until now, there has been no report on the impact of the damage caused by the earthquake. Modeling results show that this earthquake has no potential for a tsunami. Until 12.30 WIB, BMKG monitoring results have shown no aftershock activity," he concluded. (RRI)