Another 1.8 million doses of Sinovac vaccine arrive from China 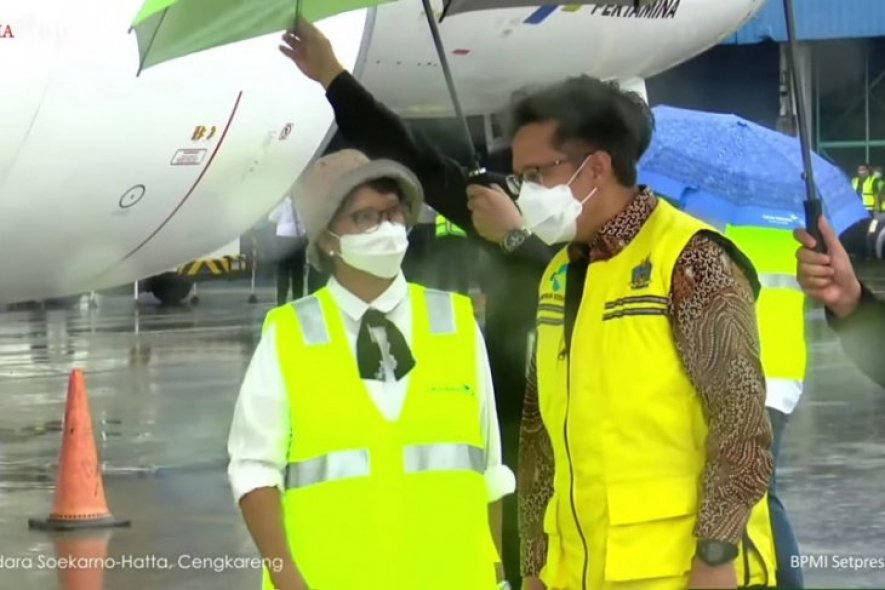 Some 1.8 million doses of the COVID-19 vaccine ordered from China's Sinovac Biotech Ltd arrived at the Soekarno-Hatta International Airport in Tangerang, Banten, on Thursday.The vaccine doses, transported aboard a Garuda Indonesia aircraft, were the second batch of Sinovac's vaccine to have arrived in the country after the delivery of the first consignment of 1.2 million doses on December 6."Alhamdulillah (thank God), today, 1.8 million doses of the vaccine from Sinovac arrived in Indonesia, and this vaccine will be sent to Bio Farma in Bandung for safe storage in accordance with the WHO standards of vaccine storage," Foreign Affairs Minister Retno Marsudi noted at the Soekarno-Hatta International Airport on Thursday.The minister remarked that another 15 million doses of bulk vaccines from Sinovac will arrive in the near future and will be manufactured by state-run vaccine maker PT Bio Farma.In addition to Sinovac, the government has searched for other sources of the vaccine."Indonesia has signed a commitment to supply 50 million doses of the vaccine from the US company Novavax that used the sub-recombinant protein platform and 50 million doses from British company AstraZeneca that used the viral factor platform," she revealed.AstraZeneca's vaccine has received emergency use authorization (EUA) from the UK's Medicines and Healthcare Product Regulatory Agency (MHRA)."This is good news for us because MHRA is a regulator that has in place a reliance mechanism with the BPOM, Indonesia's Food and Drug Control Agency. With this mechanism, EUA issuance for AstraZeneca will be easier, as it could be used as a basis and review to issue EUA in Indonesia," Marsudi elaborated.Indonesia has ordered the COVID-19 vaccine from various sources: 125 million doses from China's Sinovac Biotech Ltd; 100 million doses of US-Canada's Novavax; 100 million doses from British AstraZeneca; 100 million doses from Germany-US' Pfizer; and 16-100 million doses of free vaccine from Global Alliance for Vaccines and Immunization (GAVI) as part of a multilateral cooperation. (antaranews)