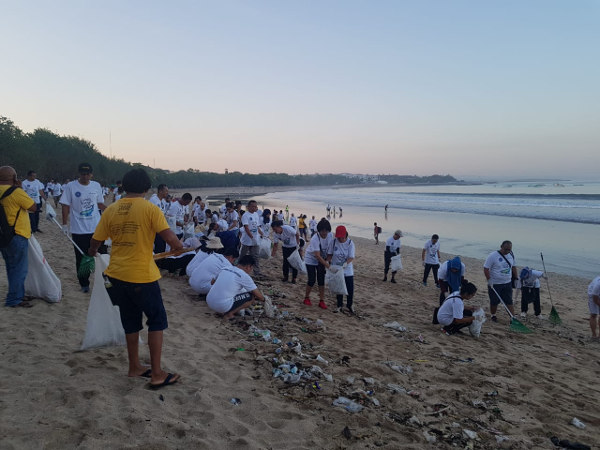 People around Kuta Beach, Bali started 2021 by cleaning up the beach. The cleanup which was done on Friday, January 1 also involved the Indonesian military (TNI) and police (Polri), scout (Pramuka) members and the state agency apparatuses. Three heavy equipment were used to ease the transport of garbage which included not only plastics, but also woods and bamboos.

The collected garbage reached 30 tons. Territorial Assistant Chief of Staff Military Command Kodam IX/Udayana Colonel Infantry Made Mahaparta said in the cleanup at Kuta Beach that 70 percent of the garbage is plastics.

Head of Environment and Cleanliness Service of Badung Regency, I Wayan Puja said the piling garbage at Kuta Beach is an annual issue. Plastic waste and other marine debris washes onto Kuta Beach every year in the rainy season. According to Wayan Puja, this year big woods waste starts to decrease. It is mostly plastic waste. It means that the garbage comes from the residential waste that fails to be handled properly.

Wayan Puja explained that in the rainy season, garbage from residence and other areas is swept by the river flow entering Kuta Beach, scattering along the 15-km-long coastal line.

Meanwhile, Denpasar Naval Base Commander Colonel Ketut Budiantara said the cleanup had to start from all people. He encouraged the locals and tourists to keep the cleanliness of the beach and put garbage properly when having recreation in the beach.

According to Budiantara, besides spoiling the beauty, garbage can harm ecosystem in the beach. If the garbage from the seashore enters the area near the dock, ship traffic may be disturbed.

More in this category: « Diplomatic Corner New Consular Counter in the New Year 2021 »
back to top
Home