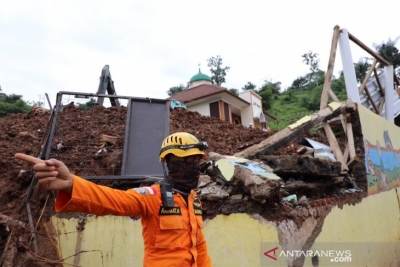 The death toll in Sumedang landslides rose to 28 as three more bodies were found by a joint search and rescue team on Saturday, while 12 people remained missing, according to data of the National Disaster Mitigation Agency (BNPB)."Referring to data from the Operations Control Center (Pusdalops) of the BNPB, as of Sunday, January 17, at 3:59 WIB, the joint SAR team has found a total of 28 bodies," Dr. Raditya Jati, the agency's Head of the Center for Data, Information and Communications. Disaster, said in a press statement here on Sunday.As many as 12 other victims remained missing, he said.Incessant rains hampered the search operations which had to be carried out carefully and vigilantly because of possible subsequent landslides, as the Geological Agency warned that there were still cracks in several landslide locations, he said.The joint team used four heavy equipment in the process of evacuating victims, which was expected to last until the next few days.Two consecutive landslides hit Cihanjuang Village, Cimanggung Sub-district, Sumedang District, West Java, on January 9, displacing 1,020 people and destroying several houses.

More in this category: « Death toll in West Sulawesi's earthquake has climbed to 56: BNPB 5.4-magnitude quake hits Pesisir Barat in Lampung province »
back to top
Home