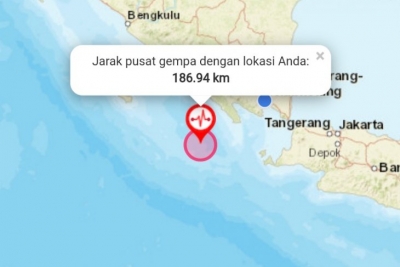 A 5.4-magnitude earthquake hit Pesisir Barat district, Lampung province, on Saturday evening, but no tsunami warning was issued, according to the Meteorology, Climatology and Geophysics Agency (BMKG) office in Lampung.The epicenter of the quake, which struck at 4.26 p.m. local time, was located in the sea, 145 kilometers south of Kru city, Pesisir Barat district, at a depth of 43 kilometers, coordinator of the BMKG office's data and information section, Rudi Hartanto, said.The quake was a shallow quake caused by subduction activity, he informed.The tremor was felt in the districts of Lampung Barat, Pesawaran, and Tanggamus, and the Lampung provincial capital of Bandarlampung, he said.As of 4.55 p.m. on Saturday, he had yet to receive a report on the aftershock and material damage, he added. (antaranews)

More in this category: « Landslide death toll rises to 28 in Sumedang, 12 still missing Death toll in W Sulawesi's 6.2-magnitude quake rises to 73 »
back to top
Home