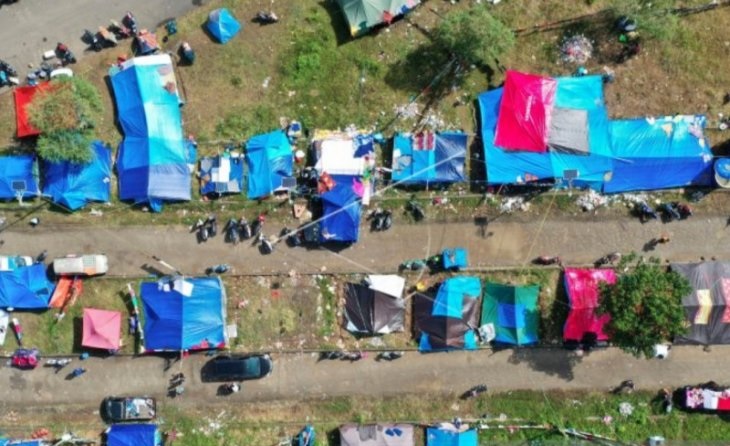 Aerial photo of evacuee tents in the vicinity of Manakarra Stadium in Mamuju, West Sulawesi on Jan 18, 2021 (ANTARA FOTO/Sigid Kurniawan/rwa.

The West Sulawesi Provincial Disaster Mitigation Task Force has reported a total of 89,624 people of Mamuju and Majene districts which bore the brunt of a 6.2-magnitude earthquake on January 15, are still taking refuge.

"The evacuees comprise 60,505 in Mamuju district and 29,199 in Majene," spokesman for the task force M. Natsir said here on Saturday.

"Three people are still missing in Majene district and two others died at evacuee camp," he said.

A powerful earthquake rocked the districts of Majene and Mamuju early on Friday (Jan 15). The epicenter of the quake was located on land, six kilometers northeast of Majene, at a depth of 10 kilometers.

The shallow quake, which the Meteorology, Climatology, and Geophysics Agency (BMKG) believes was caused by a local fault, destroyed several buildings, including the governor's office, a military office, and the Maleo Hotel.The earthquake, which damaged several homes and a public health center, also triggered three landslides along the Majene-Mamuju road section, disrupting the transportation of people and goods, chief of the BNPB Center for Disaster Data, Information and Communication, Dr. Raditya Jati, said at an online press conference in Jakarta recently//ANT