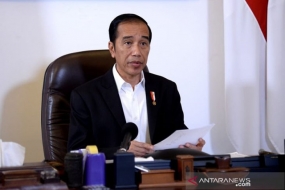 President Joko Widodo deciphered four crucial points in the evaluation of the implementation of the large-scale social restrictions (PSBB) policy in the four provinces and 72 districts and cities. "What I want to say is that we seek a detailed evaluation in districts and cities pertaining to data on the trend of whether new positive cases in each region applying the PSBB rose or decreased," President Widodo stated during the limited meeting held via videoconference from the Merdeka Palace, Jakarta, on Tuesday. Based on the new cases, the president noted that the results before and after the implementation of PSBB were varied and differed across regions. The head of state opined that this was since the implementation of PSBB was varied. Consequently, the number of new cases in regions had decreased gradually and consistently but not drastically, though there were areas where the number of cases had declined but had also not been consistent and still volatile. "Moreover, in some areas, the addition of cases has not changed, as before the implementation of PSBB. Such aspects also need to be underlined," he stated. The second surmise that the president drew was that of the 10 provinces with the most positive cases, only three -- DKI Jakarta, West Java, and West Sumatra -- had PSBB status, while seven other provinces were still non-PSBB. Hence, evaluations were also conducted at the provincial and district/city levels that did not apply PSBB but implemented a physical distancing policy and strict health protocols in the people's day-to-day lives. "A comparison should be drawn between PSBB and non-PSBB, as there are indeed innovations on the field by applying a policy model of restricting activities in the community adapted to the context of their respective regions," he stated. According to the president, the third aspect was that the management of PSBB control was also expected to not become trapped in the administrative limits of the government. "It also means agglomeration, handling large areas that are interconnected, so that inter-regional management is integrated. For instance, what Greater Jakarta has implemented is interrelated, so that social mobility arrangements from the community can be integrated and be better," he noted. The president affirmed that the fourth vital aspect based on the Task Force’s data was that 70 percent of the positive cases were in Java, as well as 82 percent of mortality was also in Java. The president also urged the Task Force to ensure that the COVID-19 pandemic is effectively brought under control in five provinces in Java, especially in the subsequent two weeks. During the meeting, the president also sought to ease the PSBB in a careful manner and not hurriedly. (ANTARA) 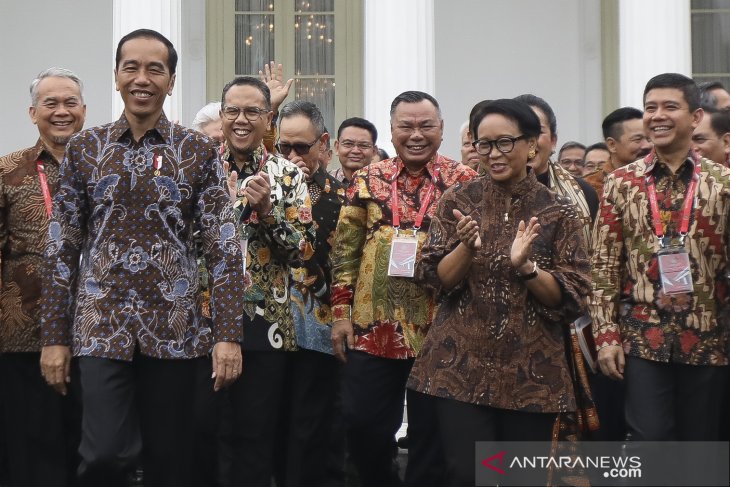 Ambassadors are urged to not solely focus on cooperation in the political and security fields but also deepen economic diplomacy for the realization of productive cooperation. An observer of Economy and Foreign Diplomacy Gerry Hukubun noted in his statement on Tuesday that in accordance with the Constitutional mandate, the ambassador, as an envoy of peace, should establish and maintain sound bilateral relations between both nations. "That is an absolute must that all ambassadors should carry out. However, his role is not solely restricted to being an envoy of peace but also more likely in the political and security fields. However, the ambassador’s role should transcend merely maintaining peaceful relations," he remarked. Hukubun noted that bilateral relations are also international ties between the two countries in various fields, including politics, culture, and economics. "The ambassador’s role at this time must be more focused on the economic field. This is especially important in the midst of the current face-paced technological advancements. Of course, we do not want to be left behind other countries that can capitalize on the development of this era," he stated. He remarked that President Joko Widodo had realized that if the diplomatic role were to be further enhanced, then economic growth resulting from the cooperation between the countries would be even more advanced than before. Hukubun believed that the ambassador was actually a career and a political position, for which he/she was tasked with serving as an investment or export ambassador. "A person's talent in fulfilling a task that has an impact on economic growth is more suitable if that individual is talented in terms of marketing and harbors an entrepreneurial spirit," he pointed out. In a transparent technological era such as this, he suggested President Joko Widodo be more selective and appoint ambassadors, with entrepreneurial spirit and productive marketing skills. "In this way, the ambassador's role will be more effective as an investment and export ambassador," he stated. Currently, several nations can potentially boost economic cooperation with Indonesia by attracting investment and opening up export opportunities from Indonesia to these countries. (ANTARA) 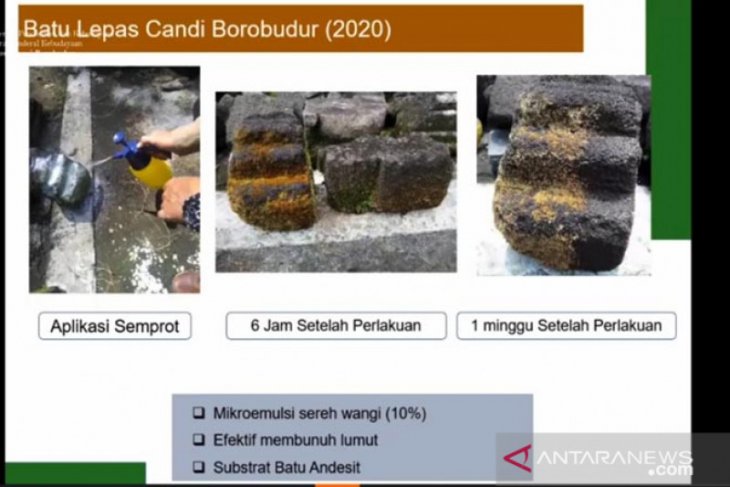 Conservation work at the Borobudur Temple in Central Java will be carried out using a microemulsion of citronella oil from 2021, said Leliek Agung Haldoko, a conservationist with the Borobudur Conservation Office (BKB). The move will be part of efforts to promote the use of local natural resources for preserving cultural heritage sites, he added. "Starting 2021, we will gradually use citronella oil (microemulsion) on the surface of the Borobudur Temple structure," Haldoko said in Magelang, Central Java, on Monday. Borobudur Temple, one of the world's largest Buddhist temples, is located in Kedu Valley, Central Java. It is about 45 minutes by flight from Jakarta, the capital of Indonesia. The three tiers of the monument; the pyramidal base with five concentric square terraces; the trunk of a cone with three circular platforms; and, the monumental Buddhist stupa at the top were built in the 8th and 9th centuries AD during the reign of the Syailendra Dynasty. "The utilization of citronella oil microemulsion has several advantages. Besides killing moss or preventing its return, it is also environment-friendly," said Haldoko during a virtual discussion on "New Innovation to Preserve Cultural Sites using Essential Oils". Essential oils extracted from plants are classified as generally recognized as safe (GRAS) by many Food and Drug Administrations, he said. Citronella oil, he added, has a unique fragrance and does not harm humans, and is, therefore, safe for conservationists. According to Haldoko, research into the utility of essential oils, including citronella oil, for conservation work is part of BKB's commitment to develop environmentally friendly conservation substances and to stop the use of chemical substances. In 2008, BKB was reprimanded by the United Nations Educational, Scientific, and Cultural Organization (UNESCO) for using chemical substances for conservation works. The Borobudur Temple was restored with UNESCO's help in the 1970s. (ANTARA)

Indonesia to Produce COVID-19 Test Kits, Ventilators by Late May 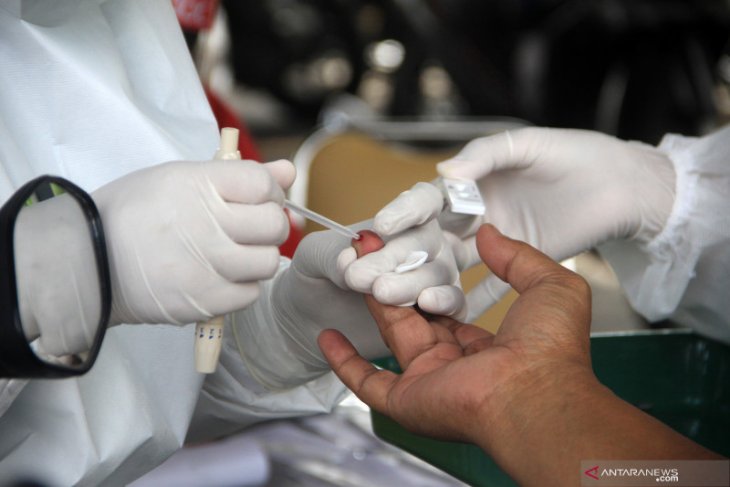 Indonesia will produce COVID-19 test kits and ventilators by late May of 2020, Minister of Research and Technology/Head of the National Research and Innovation Board Bambang Brodjonegoro stated. "There has been encouraging development in the production of test kits, including rapid test kits and PCR. The rapid test kits are currently undergoing validation testing and registration with the Health Ministry," he noted in Jakarta on Monday (11/05). "We have targeted to produce 50 thousand to 100 thousand synthetic peptide-based rapid test kits. The production capacity of rapid test kits may reach up to 100 thousand units per month," he remarked. The country is also in the process of developing three more types of rapid test kits. It takes one to two months to produce them, he noted. In connection with the plan to produce ventilators, he remarked that the Health Ministry’s Health Facility Security Board has tested four prototypes of ventilators that are currently undergoing clinical testing. "One of the four that comes from ITB (the Bandung Institute of technology) has undergone clinical test and is expected to enter production phase soon," he noted. Brodjonegoro echoed the readiness of domestic producers to manufacture COVID-19 test kits. As of Sunday, the Task Force for Acceleration of COVID-19 Handling had recorded 14,032 confirmed cases of COVID-19 across the country, with 2,698 recoveries and 973 deaths. Government spokesman for the COVID-19 task force Achmad Yurianto has warned of the increased trend of asymptomatic persons (OTG) testing positive for the coronavirus. "Initially, we defined the classical spread by people, with symptoms of high body temperature of more than 38 degrees Celsius, cough, and shortness of breath. However, during the course of its development, these have not become specific symptoms of COVID-19 infection," Yurianto remarked during a press conference of the Task Force for Acceleration of COVID-19 Handling in Jakarta on Sunday. The spokesman noted that the government had found more people to have tested positive for COVID-19 during a PCR test but exhibited only mild symptoms or at times presenting no symptoms of the disease. The OTG would not exhibit any symptoms, such as fever and cough, and they appeared healthy. If they visit crowded places without wearing masks, then they might transmit the virus to several people, including those from vulnerable groups. "This has become one factor in the increase in the number of COVID-19 cases in Indonesia," he stated. (ANTARA)