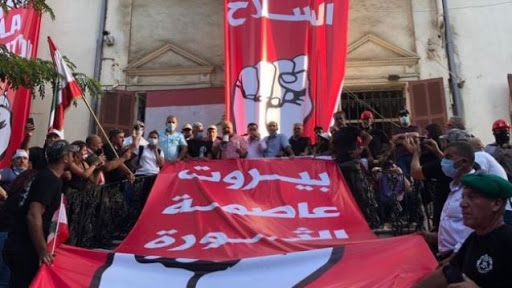 Dozens of protesters in Beirut have entered the foreign ministry during a wider demonstration over Tuesday's huge explosion that left at least 158 dead. Several thousand people are on the streets in a planned protest, but there has been violence as police fired tear gas at stone-throwing demonstrators. There are also reports of gunfire being heard from central Martyrs' Square. Many Lebanese are furious at the failure to prevent the explosion of thousands of tons of ammonium nitrate. The blast at the port devastated parts of the city and has reignited deep-seated anger with the government. The explosion was caused by a huge stock of ammonium nitrate that had been seized from a ship six years ago but never moved. The government has promised to find those responsible. The tragedy has deepened distrust of what many had already seen as an inept and corrupt political class. An anti-government protest movement erupted last October, fueled by an economic crisis and a collapsing currency//BBC