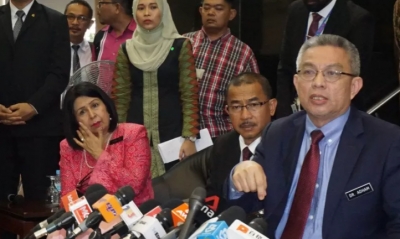 The Malaysian Ministry of Health (KKM) stated that it is increasing the preparedness of various aspects of health in dealing with COVID-19, including increasing the capacity of 54,706 RT-PCR tests per day.

He said that 13 PTN laboratories under the Ministry of Higher Education and private laboratories are now pushing human resources to the maximum stage.

Until October 14, 2020, he said, as much as 42 percent of the country's laboratory capacity was used and that number would increase to test more samples, especially in the red zone, yellow zone, and screening and close contact detection activities by KKM.

"In Sabah, the Kota Kinabalu government health laboratory, the laboratory at Queen Elizabeth Hospital with a capacity of 2,500 tests a day are already operating. Meanwhile, the remaining samples from the whole of Sabah were taken by Malaysian Air Force flights to Peninsular Malaysia," he said.

In addition, laboratory equipment at the Tawau Kubota Health Clinic is being upgraded so that it can run RT-PCR testing and is expected to operate in the near future.

"In the field also early detection of positive cases of COVID-19, more RTK-Ag tests have been used," he said.

More in this category: « Russia Rejects US Offer To Freeze Nuclear Weapons Germany Grappling With Second Wave Of COVID-19 Outbreak »
back to top
INTERNATIONAL NEWS