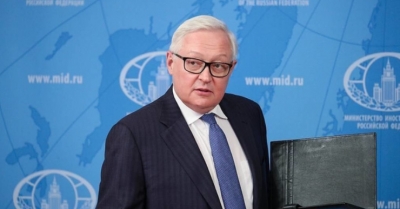 "This is an unacceptable proposal," the diplomat said, as quoted by TASS, Wednesday (14/10/2020), while commenting on the initiative, which was previously voiced yesterday by the US President's Special Envoy for Arms Control Marshall Billingslea.

Speaking at a videoconference, hosted by the Heritage Foundation on Tuesday (13/10/2020), Billingslea said his country is ready to extend New START if the two countries agree to limit or freeze their nuclear arsenal.

"We are actually willing to extend the New START Agreement for some time, on condition that they, in return, agree to a limitation or freezing of their nuclear arsenal. We are willing to do the same," he said. "We have proposed a compromise: agree with us to freeze, and we will extend New START for some period,".

"We are ready to reach this agreement, in fact, we can achieve it tomorrow, but Moscow has to show the political will to do it too," added Billingslea.

The Treaty between the United States and the Russian Federation on Measures for the Reduction and Restriction of Further Strategic Offensive Weapons (New START Agreement) entered force on 5 February 2011.

The New START Agreement will remain in effect for 10 years, until 2021, unless before that date is replaced by a subsequent agreement on the reduction and limitation of strategic offensive weapons. It can also be extended for no more than 5 years (i.e. until 2026) by mutual agreement of the parties.

Moscow has repeatedly asked Washington not to delay the extension of the treaty it describes as the gold standard in disarmament.

In an interview with the Financial Times in late June 2019, Russian President Vladimir Putin said that once this agreement ceases to exist, "there will be no instruments in the world to limit the arms race.". (RRI)

More in this category: « Donald Trump Recovers From Corona Malaysia Increases PCR Test To 54,706 Per Day »
back to top
INTERNATIONAL NEWS