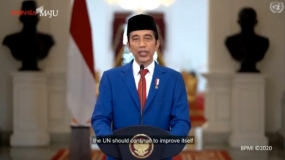 President Joko Widodo said that all nations must work together to create a centric Indonesia by building from the periphery, from villages, from the frontier islands to the border.

"Realizing one Indonesia we must also work together to build Indonesia fairly and evenly, building a centric Indonesia by building from the periphery of the village from the frontier island to the border," said the President in commemoration of the 92nd Youth Pledge Day, based on a video broadcast by the Presidential Secretariat, in Jakarta, Wednesday.

The President said that with fair and equitable development, people in various regions in the country will feel part of Indonesia.

Therefore, the government continues to carry out infrastructure development to create connectivity between regions in Indonesia.

We must continue to fight for unity by respecting differences, maintaining tolerance, and maintaining the integrity and sovereignty of the Republic of Indonesia. The spirit of solidarity must also give priority to helping each other.

"We have to work together to care for Indonesians. We must maintain it with a spirit of solidarity and a sense of brotherhood,” he said.
In commemoration of this Youth Pledge, the President also invited the spirit of the youth oath to continue. Looking back on 92 years ago, the Youth Pledge event has brought positive energy to unite the nation.

"The Youth Pledge brings a positive energy that unites competition and differences, it does not have to make us forget about common problems, common interests, and common goals," said President Jokowi. (Antaranews) 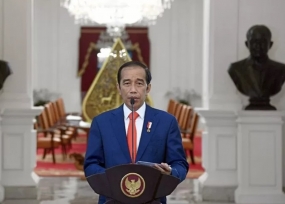 "The Youth Pledge brings a positive energy that unites competition and differences, it doesn't have to make us forget about common problems, common interests, and common goals," said President Joko Widodo who was seen on the YouTube page of the Presidential Secretariat, Wednesday.

President Jokowi delivered this virtually in his remarks at the commemoration of the 92nd Youth Pledge Day of the Ministry of Youth and Sports.

"We must continue to make efforts to maintain unity, becoming Indonesia is not enough to be just part of Indonesia's territory. We must work together to care for Indonesianism," said the President.

Indonesianism, according to the President, must always be maintained in a spirit of solidarity and a sense of brotherhood.

"We must help each other in a spirit of solidarity. There is no Java, no Sumatra, no Sulawesi, no Papua, there are fellow countrymen," said the President.

"We must continue to strive for unity by respecting differences, maintaining tolerance, and continuing to maintain the integrity and sovereignty of the Republic of Indonesia."

In commemoration of the Youth Pledge, the President also invited the spirit of the youth oath to continue.

"The spirit of the Youth Pledge must continue to burn," he said.

In the big flow of globalization that often occurs, said the President, there is fierce competition between countries and also between individuals.

"It is not uncommon for the competition to end in efforts to defeat each other, destroy each other. This becomes negative energy that harms all of us," said the President.

92 years ago, the Youth Pledge brought youth from all over the archipelago to set aside differences in ethnicity, religion, and regional language to swear to become one Indonesia, one homeland, one nation, and one language, so now unity is also needed to build an Indonesia that is fair and equitable.

"To realize one Indonesia, we must also work together to build Indonesia fairly and equitably by building from the periphery, from villages, from the frontier islands to the border," said the President.

The government has also built infrastructures that facilitate interregional, inter-island connectivity to unite Indonesia, including the 30th TVRI station in West Papua.

The station will serve the people of Papua, provide a variety of quality information so that Papuans get the same access to information as people in other parts of Indonesia. (Antaranews) 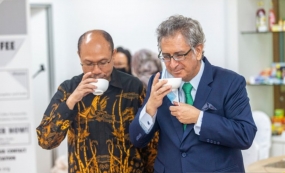 President of the Singapore Coffee Association, Victor Mah, was all praises for the taste of Indonesian coffee during a cupping series program organized by the Indonesian Embassy in Singapore.

Mah, concurrently a member of the ASEAN Coffee Federation, commended the high quality and vast array of Indonesian coffee varieties.

The Indonesian Embassy in Singapore, in collaboration with Bank of Indonesia's Singapore office, and the Singapore Coffee Association, presented 11 types of coffee from various regions in Indonesia, according to a statement received here, Tuesday.

Chargé d'affaires of the Indonesian Embassy in Singapore Didik Eko Pujianto stated that Indonesia, located on the Ring of Fire, is home to several volcanoes that has its own pros, including the many highlands.

In the highlands, coffee plants can thrive and have become a crucial export commodity.

"Hence, the Cupping Series Program is right on target to further promote the quality of Indonesian coffee to Singapore," he affirmed.

Many coffee varieties, each with its quintessential uniqueness, were promoted during the activity.

Meanwhile, Colombian Ambassador in Singapore Manuel Hernando Solano Sossa enthusiastically partook in the coffee cupping session owing to his keenness to sample the taste and get a whiff of the aroma of Indonesian coffee.

As the ambassador of one of the world's coffee producers, Sossa emphasized the importance of holding such events to edify and acclimatize the public to different Indonesian coffee commodities.

They held the Cupping Series Program with stringent adherence to health protocols under the Singapore government’s provisions. (Antaranews) 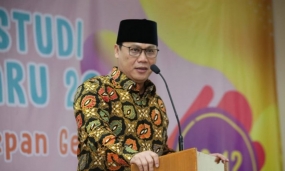 Deputy Speaker of the House of Representatives (DPR), Ahmad Basarah, has criticized French President Emmanuel Macron over his defense of the right to depict and publish cartoons of Prophet Muhammad, citing freedom of expression.

“The freedom of expression is a fundamental part of democracy, but it does not mean that every individual is free to do whatever he or she wants by violating other people's rights, including the one related to faith,” Basarah said in a statement here on Tuesday.

Commenting on global news reports of Macron’s controversial ‘anti-Islam’ remarks, Basarah said, as a developed nation, France must be able to show inter-faith tolerance towards all religious adherents, including Muslims inside and outside the country.

Therefore, President Macron is advised to be wise in making statements so they do not make Muslims inside and outside France feel offended, he said adding, Islam currently has 1.9 billion adherents all over the world.

“All states must participate in maintaining world peace,” said the senior politician from the Indonesian Democratic Party of Struggle (PDIP).

Macron's remarks following the beheading of Samuel Paty, a history and geography teacher, for showing cartoons of Prophet Muhammad during a class on October 6, 2020, have sparked controversy and fueled a backlash from Muslims worldwide over the past few days.

Abdullakh Anzorov, 18, who killed Paty on October 16, 2020, was later shot dead by the French police. Anzorov had felt offended over Paty showing the cartoons in class.

"France will not give up our cartoons," Macron said while responding to Paty's death, as reported by the BBC.

In the aftermath of his murder, cartoons depicting Prophet Muhammad, made by Charlie Hebdo, were projected onto public buildings.

In response to Macron's “Islamophobic” behavior and “hostility” towards Islam, Prophet Muhammad, and Muslims all over the world, the Islam Defenders Front (FPI) denounced the French leader and categorized him as a "kafir harbi” or infidel.

“Macron's decision to bestow Samuel Paty with the Légion d'honneur is obviously a crime against the teachings of Islam," the FPI central executive board disclosed in its letter dated October 24, 2020.

In the letter signed by FPI general chairman Ahmad Shabri Lubis and FPI secretary-general Munarman, the Muslim-based organization also urged Muslim communities globally to rise from the oppressions of the "modern civilization of ignorance" that projects Islam as an enemy.

Two people had attacked the offices of the magazine on January 7, 2015, after Charlie Hebdo published cartoons on Prophet Muhammad saying their publication was under the freedom of expression. At least 12 persons were killed and 11 others were injured in the attack. (Antaranews)