Bosnians go to the polls to choose between nationalists and reformists 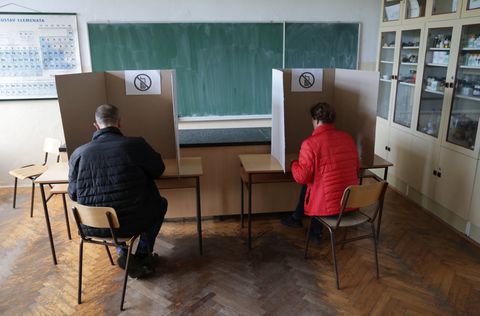 Bosnians voted on Sunday to choose the country's new collective presidency and lawmakers at national, regional and local levels, deciding between long-entrenched nationalist parties and reformists focused on the economy.

Nearly 3.4 million people are eligible to vote in a country going through its worst political crisis since the end of its war in the 1990s, prompted by separatist policies of the Serb leadership and threats of blockades by Bosnian Croats.

The polls will close at 7 p.m (1700 GMT), with first official results expected at midnight. But political parties are expected to come out with their own results around 10 p.m. read more

Bosnia comprises two autonomous regions, the Serb-dominated Serb Republic and the Federation shared by Bosniaks, or Bosnian Muslims, and Croats, linked by a weak central government. The Federation is further split into 10 cantons. There is also the neutral Brcko district in the north.

Election campaigning by ruling ethnic parties was dominated by nationalist rhetoric, focusing rather on themes of protection of national interests and criticism of opponents than on issues such as jobs and soaring inflation.

"Honestly, I don't have high expectations," said Nemanja Ratkovac, casting his ballot in the Serb Republic's de facto capital of Banja Luka. "I think that neither of the (candidates) did much in this election campaign, except (speak) against each other."

A lack of reliable polls has made it difficult to predict the outcome of the vote, but many analysts believe nationalist parties will remain dominant and that the biggest change may come in the Bosniak camp, which is the largest and most politically diverse.

The leader of the largest Party of Democratic Action (SDA), Bakir Izetbegovic, is running for the role of Bosniak presidency member in what is seen as a tight race with Denis Becirovic of the anti-nationalist Social Democratic Party (SDP), whose bid is supported by 11 civic-oriented opposition parties.

Observers believe that Serb and Croat nationalist parties will remain in power, but some polls have suggested that separatist pro-Russian leader Milorad Dodik, who is running for the role of president of the Serb Republic, is facing strong competition from opposition economist Jelena Trivic.

"Those who win the elections will also be held accountable to the people for finding the best possible solutions and answers to the world's and Europe's challenges, which will be anything but easy," Dodik, who boasts about his close ties with Russian President Vladimir Putin, said after casting his ballot.

The Croat parties have warned they may block the formation of a government after the vote if moderate Zeljko Komsic wins the post of Croat presidency member.

They say his victory would be based on votes by majority Bosniaks, and that they will not regard him as the legitimate Croat representative.

"I think that finally, after 30 years, it should be better for the people in whole of Bosnia," said Milenko Crnjak, after he voted in the western town of Livno.

"We have so much potential ... but young people are departing and the old are staying and dying." (Reuters)