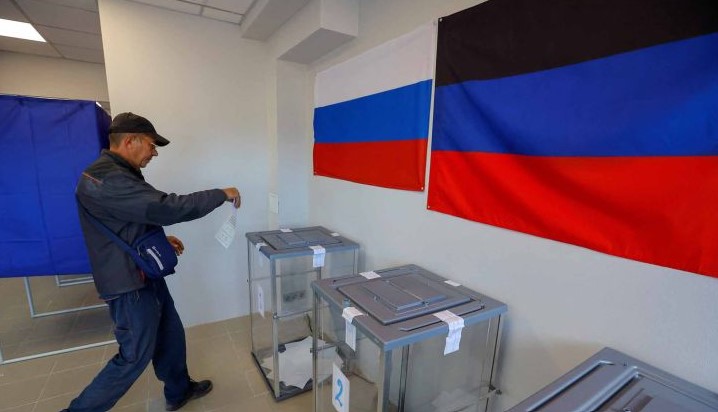 The Indonesian Foreign Ministry has said that referendums in four Russia-controlled regions in Ukraine,  are a violation of the UN Charter and international law."All countries must respect the sovereignty and territorial integrity of other countries. These are the main principles encapsulated in the UN Charter. Indonesia consistently upholds and respects these principles," the Indonesian Foreign Ministry tweeted on Sunday.It further said that these principles also apply in the case of the referendums in the four regions in Ukraine.

"The exercise of such referendums violates the principles of the UN Charter and international law," it added.According to the ministry, such referendums will further complicate efforts to peacefully resolve the conflict and perpetuate the war, which will only cause suffering to all.Referendums were recently held in four Ukrainian regions - Donetsk, Luhansk, Kherson, and Zaporizhzhia, for residents to vote on whether they wished to become part of the Russian Federation.Russia claimed that the results of the referendums show that the majority of the residents of the four regions, which represent about 15 percent of Ukraine’s territory, voted overwhelmingly in favor of joining Russia.The Russian-run referendum votes took place over five days, from Sept. 23 through Sept. 27, despite international outrage.Meanwhile, Russia has used its veto at the United Nations Security Council to scuttle a draft resolution that sought to condemn its annexations of Ukrainian territory, according to Aljazeera.United States Ambassador to the UN Linda Thomas-Greenfield introduced the resolution to the UN Security Council meeting on Friday that called on member states not to recognise any altered status of Ukraine and obliged Russia to withdraw its troops.Ten nations voted in favour of the resolution co-sponsored by the US and Albania, while China, Gabon, India and Brazil abstained. (Antaranews)