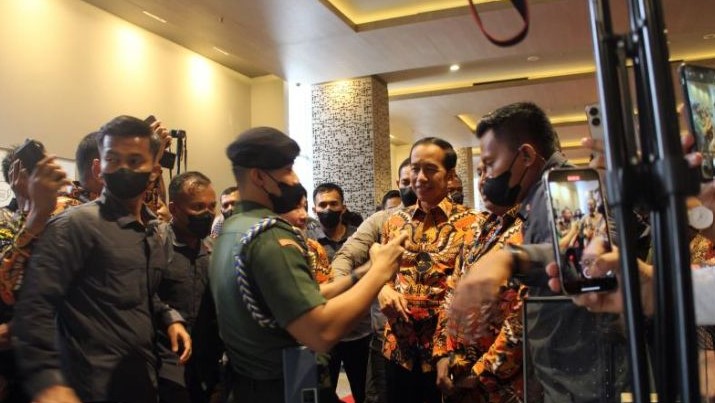 President Joko Widodo (Jokowi) has urged presidential and vice-presidential candidates to maintain a harmonious political climate ahead of the 2024 General Elections."I ask presidential and vice presidential candidates attending the 2022 HIPMI (Indonesian Young Entrepreneurs Association) National Congress in Surakarta here to maintain a harmonious political climate ahead of the 2024 General Elections, particularly amidst the vulnerable global conditions now," he said at the opening ceremony of the congress here on Monday.While refraining from naming any particular candidate, the President said that candidates must maintain harmonious political conditions and when a conflict occurs, ensure that the friction does not escalate."I do not name any candidate, but it has been disclosed openly earlier by the minister of investment (Bahlil Lahadalia)," he said.He emphasized that a heated political climate must be avoided at all costs amid the ongoing global crises, which could potentially spill over to Indonesia."I have said repeatedly that 14 countries potentially become World Bank or International Monetary Fund (IMF) ‘patients,’ and another 28 countries have lined up before the IMF," the President said.Presidential and vice presidential candidates must also maintain a harmonious political climate by campaigning with substantial mandates instead of relying on racial or religious sentiments, which could threaten national unity, he added.He said that he would welcome debates among candidates as well as their ideas on making Indonesia a better country."We must ensure that debates do not escalate nor get adorned by racial, religious, and ethnic sentiments. We must prevent this as well as the politicization of religion, of which harms we experienced and now seek to avoid," he remarked. (Antaranews)