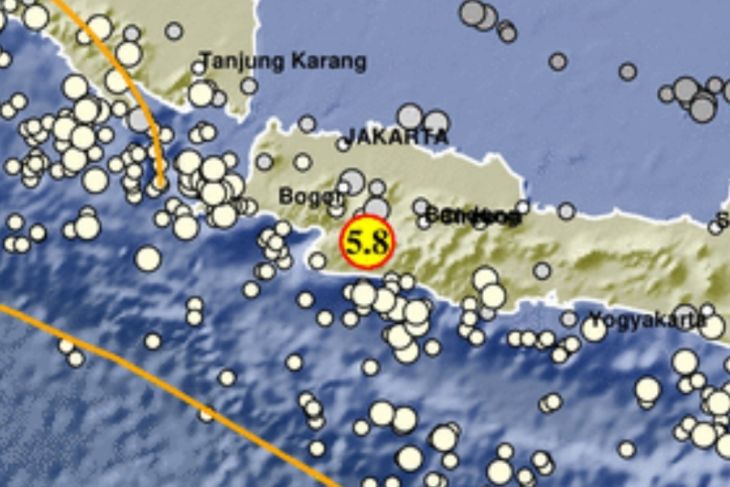 The 5.8-magnitude earthquake, which rattled Sukabumi city, West Java province, on Thursday morning was triggered by a deformation in the Indo-Australian Plate, the Meteorology, Climatology, and Geophysics Agency (BMKG) said.Head of the BMKG’s Earthquake and Tsunami Center, Daryono, informed on Thursday that the epicenter of the earthquake was located at 7.09 degrees south latitude and 106.95 degrees east longitude.More precisely, the center of the quake was on land and was located 22 kilometers (km) southeast of Sukabumi city at a depth of 122 km."Considering the location of the epicenter and the depth of the hypocenter, the earthquake was a medium-sized quake (caused) due to deformation or rock fracture of the Indo-Australian Plate -- which is also popularly known as an intraslab earthquake or Benioff earthquake," the BMKG official informed.He said that source mechanism analysis showed that the earthquake, which struck at 7:50 a.m. local time, had an upward movement or thrust fault mechanism.The quake was felt by people living in Bekasi, Cisolok, Sukabumi, and Garut areas of West Java province at an intensity of II on the Modified Mercalli Intensity (MMI) scale, meaning the vibrations were likely to cause hanging light objects to sway, he added.The residents of Bandar Lampung city in Lampung province, Sumur sub-district of Pandeglang district, and South Tangerang city in Banten province, as well as Jakarta also felt the shocks at an intensity of II MMI.Meanwhile, people in Cianjur, Lembang, Bogor, Bandung, Pangandaran, Padalarang, Pamoyanan, and Sumedang areas in West Java province felt the shocks at an intensity of III MMI, meaning the vibrations felt as if a truck was passing.Furthermore, residents in Rancaekek area sensed the vibrations at an intensity scale of IV MMI, hence, many people felt the shocks during the day.As of 8:15 a.m. Western Indonesia Standard Time (WIB), the BMKG recorded one aftershock measuring 3.0 in magnitude, which occurred at 8.05 a.m. WIB.Daryono appealed to the public to remain calm, not be influenced by false information, and avoid buildings that were cracked or damaged by the earthquake."Make sure that the building where you live is quite earthquake-resistant, and there is no damage due to the earthquake, which could endanger the stability of the buildings before returning," he said. (Antaranews)