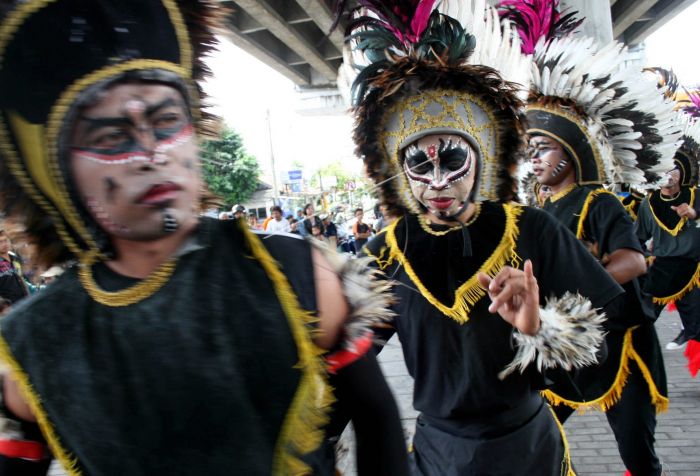 Indonesian Wonder, a daily segment featuring information about arts, tourism, culinary, and culture. In today's edition, we would introduce you about Topeng Ireng Dance.

Magelang is one of cities in Central Java Province. Talking about Magelang's tourism, we view that Magelang City is famous for some destinations, such as Mt. Andong and Borobudur Temple. Besides, the city has rich and enchanting local cultures. One of them is Topeng Ireng Dance. Topeng Ireng or also known as Dayakan is a traditional art that grows in Magelang Regency, Central Java. Topeng Ireng or Dayakan Dance is a new creation of folk dance.

The name ‘Topeng Ireng’ is derived from the words Toto, Lempeng, Irama, and Kenceng. The word Totomeans organizing. Lempeng means straight. Irama means rhythm. Meanwhile, Kenceng means hard. Therefore, when performing Topeng Ireng Dance, the dancers line up straightly and the dance is accompanied by music with hard and energetic rhythm. Topeng Ireng dance is a form of traditional art that integrates Islamic teachings with Indonesian martial art called Pencak Silat. No wonder that Topeng Ireng Dance is accompanied by dynamic music and Islamic songs. The Topeng Ireng dance not only disseminates Islamic teachings, but also portrays the life of rural community on the slope of Mt. Merbabu. The rigid movements of the dance symbolize the physical strength of the villagers when fighting against their enemies and adapting with nature in a bid to survive.

Topeng Ireng Dance is believed to have developed in the community surrounding the area of Mt. Merbabu since the Dutch occupation in Indonesia. During the Dutch occupation, people were prohibited from practicing Pencak Silat by the Dutch government so that the people created innovation of folk dance based on the movements of Pencak Silat. The dance was accompanied by Javanese musical instrument called Gamelan and Javanese songs. The Javanese songs contained lessons about life and Islamic values. Since then, Topeng Ireng Dance has expanded more. If Muslims build a mosque or prayer room, the dome of the mosque will be paraded by people before being placed. Local people will participate in the parade and it is enlivened by a dance which is accompanied by tambourine and Islamic songs. The art is later known as Topeng Ireng.

Topeng Ireng Dance has simple movements. Because the most important aspect of this dance is harmony. The more dancers participate in, the more beautiful the collaboration is. The movements of the dance are also adapted from pencak silat martial art which has been modified. From time to time, innovation has been carried out in every Topeng Ireng Show. The costumes of the dancers are the most attractive thing from the dance. Colorful feather ornaments that look like the throne of Indian chief tribe embellish the heads of the dancers. Their make-up and costumes also resemble to Indian tribe. Their costumes are featured with tassels and they have bright colors. Meanwhile for the bottom part, the dancers wear skirts decorated with tassels. In Topeng Ireng show, there are some musical instruments which enliven the dance such as Gamelan, Kendang or a drum-like instrument, Bendeor a gong-like instrument, flute, and tambourine. The flow of the rhythmic music which harmonizes with the movements and the chants of the dancers make Topeng Ireng dance become more attractive and dynamic.