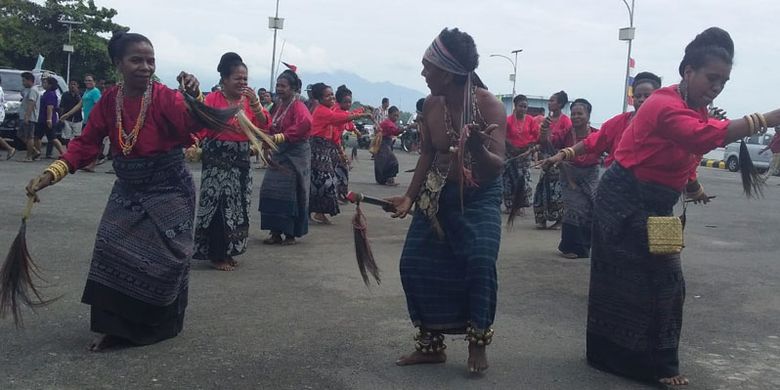 On June 4, 2019, a typical dance of Sikka regency namely Soka Papak was held to welcome Sikka’s regent Fransiskus Roberti Diogo and vice regent Romanus Woga in the event of welcoming Roro Windu Karsa Dwitya ship which will operate from Maumere to Surabaya. The Soka Papak dance was carried out by Doka Tawa Tana dance studio. Literally, Soka Papak dance consists of two words, namely Soka means dance and Papak means to welcome, to honor and to accompany. So, Soka Papak means the dance to welcome and to accompany honorary guests.

In the past, the Soka Papak dance was conducted to welcome and to accompany great and honor guests who visited Sikka regency. During the kingdom era, the dance was conducted when the king and queen visited the hamlet. All villagers together went down to the central hamlet to welcome the King and the Queen along with their entourage. The dance is usually performed by 10 females and one male. Because its function to guard honorable guests, the dancers carrying swords, matches and spears while dancing. When happening trouble, the  Soka Papak dancers will directly secured the King and Queen from the trouble makers. In the past, only certain people were allowed to perform the Soka Papak dance . They must have the skill in guarding and securing the King and the Queen. The Soka Papak dance is also called as a mass dance which is performed by dozens of selected people.

More in this category: « Gulai Talang from Jambi Immanuel old church, Maluku »
back to top
Home