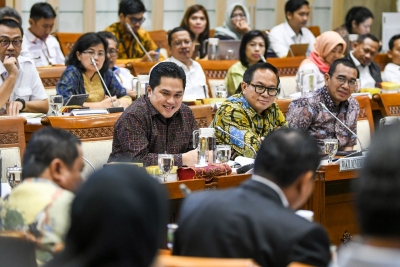 The government plans to revise a regulation and issue a ministerial decree to improve the performances of state-owned enterprises (SOEs), according to a minister.

SOEs Minister Erick Thohir said during a meeting with the House of Representatives (DPR) Commission VI on Monday that his ministry was still reviewing Government Regulation No. 41/2003 on the transfer of authorities for overseeing of SOEs from the Finance Ministry to the SOEs Ministry.

"The 2003 regulation prevents us from merging or liquidating companies, while there are a number of problematic companies," he told the commission overseeing SOEs, trade, investment, industry, cooperatives and small and medium enterprises.

Erick said the planned revision was necessary so that his ministry could address the problems faced by a number of SOEs. A recent example is state-owned insurance company PT Asuransi Jiwasraya’s liquidity problem.

Many SOEs’ problems stem from low productivity. The country’s 142 SOEs and their subsidiaries last year made Rp 210 trillion (US$14.92 billion) in total revenue, of which 70 percent was contributed by just 15 companies.

Furthermore, Erick said, SOEs had too many subsidiaries, many of which operated in sectors outside of the parent company’s core line of business.

For example, many SEO have subsidiaries that operate hotels, industrial estates and hospitals. Flag carrier Garuda Indonesia, for instance, has a subsidiary that provides ground handling services, while ship financing company PT Pengembangan Armada Niaga Nasional (PANN) has a subsidiary that leases aircraft.

“How can a ship financing company survive if it also operates aircraft leasing and hotel businesses?” Erick said.

The minister said his office had prioritized revising the 2003 regulation during the first six months of his term.

He said he would also issue a relevant decree to formulate the steps that needed to be taken to improve the performances of SOEs and to oversee their subsidiaries.

The minister told the commission he had simplified the bureaucracy within his ministry and within SOEs by reducing the number of ministerial deputies and SOE commissioners. For example, he has cut the number of PT Bank Tabungan Negara (BTN) commissioners to seven from eight and the number of its directors to eight from nine. (dfr)

More in this category: « Int'l Islamic University construction completed in 2020: Jokowi Man claiming to be final prophet gets reported for blasphemy »
back to top
Home