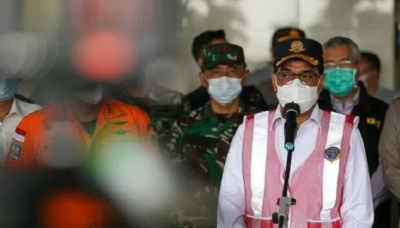 Minister of Transportation, Budi Karya Sumadi, on Tuesday outlined three instructions from President Joko Widodo (Jokowi) on the handling of the Sriwijaya Air flight SJ-182 crash."During the meeting, President Joko Widodo gave instructions on the following accelerated steps," Sumadi said at a press conference here on Wednesday.President Widodo has ordered that rescuers find the black box, retrieve the victims' bodies, and the wreckage from the plane as quickly as possible."The FDR (Flight Data Recorder) has been found," the minister confirmed.President Widodo has also asked that insurance and compensation be immediately released to the victims' families, in accordance with existing regulations.

In addition, he has directed that the cause of the accident be immediately identified and used as a lesson to improve national aviation performance.A team of divers from the Indonesian Navy retrieved one black box of the Sriwijaya Air flight SJ-182 near Laki-Pulau Lancang, Kepulauan Seribu, Jakarta around 4:20 p.m. WIB (Western Indonesian Standard Time) on Tuesday.The black box was immediately handed over to the National Transportation Safety Commission (KNKT), which will download and investigate its data to identify the cause of the accident.The TNI (Indonesian Defense Forces) and the Joint Search and Rescue Team are also preparing a plan to haul large pieces of the aircraft from the crash site using a ship fitted with a crane.Currently, search efforts are focusing on finding the aircraft’s Cockpit Voice Recorder (CVR), for which, the NTSC has prepared three Ping Locater Finder units and an underwater object detection device on the Baruna Jaya IV Ship belonging to the Agency for the Assessment and Application of Technology (BPPT). (Antaranews)
Read 73 times
Tweet
Published in Program Highlight