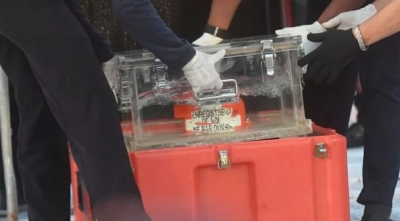 Indonesia’s National Transportation Safety Commission (KNKT) confirmed it has received the crashed Sriwijaya Air flight SJ-182's flight data recorder, which was retrieved by Navy divers from the aircraft's wreckage on Tuesday.The Boeing 737-500 jet's flight data recorder was handed over by Indonesian Military (TNI) Commander, Air Chief Marshal Hadi Tjahjanto, to National Search and Rescue Agency (Basarnas) head Bagus Puruhito, who then gave it to KNKT head Soerjanto Tjahjono.Meanwhile, the Navy’s divers are still trying to find and retrieve the cockpit voice recorder of the plane, which crashed into the ocean near Jakarta shortly after taking off from Soekarno-Hatta International Airport on January 9, 2021.KNKT head Tjahjono thanked all parties for their tireless efforts for finding and retrieving the flight data recorder. KNTK personnel will try to download the data from the device, he said.KNKT personnel will need between two and five days to do their work and have pledged to share information on whether or not the flight data can be read, he added."If we are successful in revealing the content, we are going to share its general points," Tjahjono informed.The Indonesian Navy’s divers found and retrieved the flight data recorder of the commercial jet from the seabed around 4:30 p.m. local time on Tuesday.It was found lying about 23 meters below the water surface.The black box of the aircraft, which crashed into the Thousand Islands waters on January 9, 2021, was transported to the Jakarta International Container Terminal (JICT) in Tanjung Priok, North Jakarta.Divers from the Navy's joint team put the flight data recorder (FDR) in a box and transported it on a naval sea rider boat headed to the JICT.Commander of the Navy's task force for the Sriwijaya Air search operation, Commodore Yayan Sofyan, and director of the Navy's operational affairs at the Frogman Commando Center (Puskopaska), Colonel Johan Wahyudi, accompanied the black box to the JICT.The Transportation Ministry had earlier confirmed that airport authorities had lost contact with the Sriwijaya Air flight SJ-182, serving the Jakarta-Pontianak route, around 2:40 p.m. local time on Saturday (January 9, 2021).According to the ministry, the last contact with the Boeing 737-500 jet, bearing the registration number PK-CLC, was made at 11 nautical miles north of Soekarno-Hatta International Airport, after the aircraft crossed an altitude of 11 thousand feet and was ascending to 13 thousand feet.The flight took off from Soekarno-Hatta Airport at 2:40 p.m. local time on Saturday and was scheduled to land at Supadio Airport in Pontianak, West Kalimantan, at 3:50 p.m. local time. It was carrying 50 passengers and 12 crew members on board. (Antaranews)