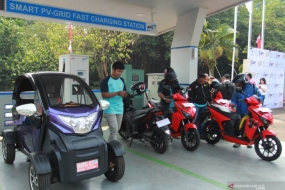 The National Energy Council (DEN) has called on offices to set up charging stations for electric vehicles.

"Every office is advised to build electric sockets at motorcycle parking lots. For motorbikes, charging a vehicle battery at home or office is sufficient. Each takes around four hours to charge and can suffice for five day trips from home to office and vice versa," he explained.

The government issued Presidential Regulation No. 55 of 2019 on the Acceleration of Battery Electric Vehicle Program for Road Transportation that had come into effect since August 12, 2019.

Development of the domestic electric vehicle industry will be expedited in accordance with the regulation. Furthermore, it encourages incentives, charging station infrastructure development, and special electricity tariffs for battery charging, as well as environmental preservation.

In the meantime, the Agency for Technology Assessment and Application (BPPT) had earlier echoed that electric vehicles would pick up steam in Indonesia, with more charging stations being set up nationwide.

The agency had held the Indonesia Electric Motor Show (IEMS) 2019 on Sept 4-7 in Jakarta to promote the use of electric vehicles in the country.

"The IEMS 2019 is initiated by BPPT to offer a broader understanding to the public in Indonesia on electric vehicles as a new form of disruptive technology," BPPT Head Hammam Riza remarked at the opening of the exhibition in Jakarta. (ANTARA) 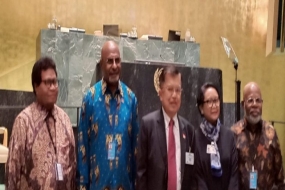 Papuan figure Nick Meset ensured that the UN did not allow Benny Wenda and his entourage to enter the UN General Assembly hall and join a delegation from Vanuatu because he was not a citizen of  that small country.

The rules applied by the United Nations are very strict. Only citizens can represent their countries and join the official delegations at the UN General Assembly, Meset remarked. Nick Meset, who participated in as a member of the Indonesian delegation with Maikel Manufandu, asserted that Benny Wenda and his colleagues were not permitted to enter the hearing.

Nick Meset, who is currently the Honorary Consul of the Republic of Nauru in Jakarta, cannot represent the country because he is still an Indonesian citizen. As a result, at the United Nations General Assembly, he belonged to the Indonesian delegation. At the UN General  Assembly in New York, the issues of Papua and referendum were not on the agenda, Meset said, adding that what was spread by that group was not true or hoax.

Because of that, the community members should not get influenced easily by the issues that Benny Wenda and his group's members proliferated, said Meset, who had ever served as the Free Papua Movement (OPM) Foreign Minister.

Nick Meset revealed the riots that occurred in several regions in Papua were caused by Benny Wenda's provocation.

"What is said that the problem of Papua will be discussed at the UN is out-of-date. He and his colleagues had done it years ago," Meset said.

Therefore, the public should not easily be influenced by Benny Wenda's statement because it is a fake promise.

"Let us together create a sense of security so that the development can be continued in Papua until the people of Papua can really get prospered," Nick Messet stated. (ANTARA) 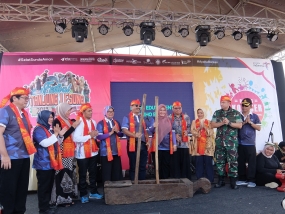 Indonesian Minister of Tourism Arief Yahya officially opened the grand event of the Tanjung Lesung Festival by performing a ceremonial tradition of mortar collision at Lalassa Beach Tanjung Lesung. In his remarks on Friday, September 27, 2019, Minister Arif Yahya expressed his support for the rise of the tourism industry in Banten by proposing Ujung Kulon as a UNESCO Global Geopark in 2020.

Minister Arif Yahya added that his party was building supporting infrastructure such as toll roads, railroads and international airports as access to the Tanjung Lesung area. Tanjung Lesung Festival hits national trending topic on Twitter and this event has made it into the Calendar of 100 National Events for 3 years in a row. (NK/trans by PUTRI) 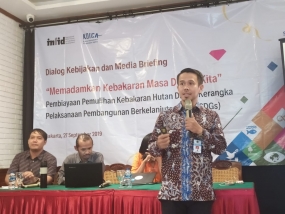 Ministry of Finance: Reforestation Fund not only for Handling Forest and Land Fires

Dr. Joko Tri Haryanto, as the Fiscal Policy Agency, Ministry of Finance of the Republic of Indonesia, said that the Reforestation Fund is used for disaster mitigation, not only to cope with funding after a disaster occurs. But it can also be used as prevention.

“Prevention of handling forest and land fires. Remember, not only countermeasures, not only when they occur then can be overcome but can also be used for prevention,” said Joko Tri Haryanto.

Furthermore Joko added, besides forest and land fires, it can also be used for social forestry problems, guidance, escort, control, and technology seeding. (RizkyF/trans by PUTRI)