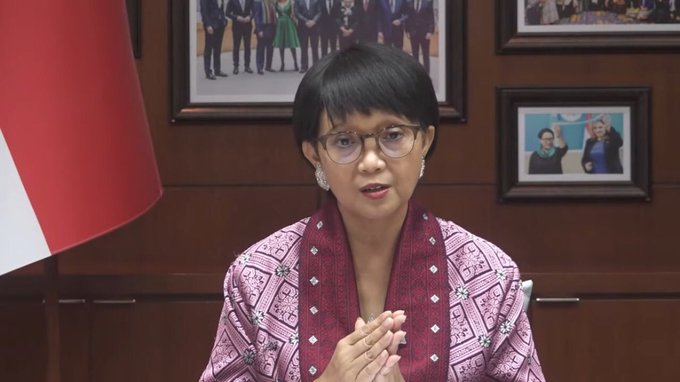 Indonesian Minister of Foreign Affairs, Retno Marsudi attended the UN Security Council (DK) Arria Formula meeting regarding the Peace Process in Afghanistan, which was held virtually on Friday (20/11). The meeting was co-hosted by members of the Estonian Security Council, Germany and Indonesia along with the Afghan co-sponsors: Finland, Norway and Qatar.

To realize this goal, Minister Retno Marsudi emphasized three important points: First, violence must be stopped immediately, because it threatens the peace process and erodes the trust of the Afghan people. Second, the international community must increase its contribution in helping the peace process in Afghanistan. Increased international assistance is needed to create a more conducive situation on the ground, increase the capacity of the Government, and at the same time sustain the economy of the Afghan people. Third, the synergy among various UN agencies needs to be strengthened to be able to further assist the peace process in Afghanistan.

Minister Retno Marsudi also pointed out that this synergy is important not only to create a conducive situation on the ground, but also to better protect vulnerable groups, including women's empowerment. All levels of society must be involved in the process of reconciliation and country development. In addition, she reiterated Indonesia's commitment to keep supporting Afghanistan, until the peace that the people of Afghanistan have longed for.

Meanwhile, President of Afghanistan Ashraf Ghani expressed his appreciation to the UN Security Council for its continued support for Afghanistan. Thereby, the UN Security Council is considered to have a major role in encouraging a ceasefire, implementing sanctions, supporting efforts to fight terrorists, including funding, and supporting regional connectivity efforts.

Minister of Education and Culture, Nadiem Anwar Makarim allowed regional heads and regional offices of the Ministry of Religious Affairs to determine face-to-face learning in their own regions. The policy will take effect in the even semester of the 2020/2021 school year or starting January 2021. Thereby, he asks schools to well prepare for it. This was stated by Minister Nadiem Makarim in the Announcement of the Implementation of Even Semester Learning for the 2020/2021 Academic Year during the Covid-19 Pandemic, Friday (20/11). He also said that the granting of this permit could be simultaneous or gradual, depending on the readiness of each region. The announcement was based on the joint decision of 4 ministers, namely the Minister of Health, the Minister of Education and Culture, the Minister of Religion and the Minister of Home Affairs.

The announcement of the Minister of Education and Culture may be a relief for students and parents of students, especially those living in remote areas. Studying online during the restrictions due to the Covid-19 Pandemic is a challenge for them. The internet signal is not good, the inability to buy a device as the main tool for learning from home and the lack of the ability of parents to accompany their children while studying are obstacles. Besides, the children are getting bored at home.

The teachers also undergo the obstacles. Even though teachers and students get credit and free Wi-Fi assistance from the government for long distance learning, without devices that are still relatively expensive, it is difficult for teachers to reach their students. It is often reported in the media that teachers are willing to walk farther to reach their underprivileged students so that they can study face-to-face, because students do not have devices.

However, the announcement of starting face-to-face learning is also greeted with concern among educators, epidemiologists and parents of students. The reason is that the pandemic is still ongoing in Indonesia and there are no signs of the transmission rate decreasing.

The government has determined that face-to-face learning starting in 2021 must be based on considerations by paying attention to facts in the field. Now, it remains what the government takes to support this decision. The central government can assist regional governments to ensure adequate infrastructure in implementing health protocols in schools. Before the school opens, surely the environment is clean; there are facilities for running water and soap for frequent hand washing. Close supervision of wearing masks and maintaining distance must also be applied.

The year 2021 is approaching closely, while the pandemic has yet to show a decline, and face-to-face learning is not necessarily 100 percent possible. The regional governments could consider conducting fifty-percent face-to-face and and 50% online learning. The important thing is that children's education is not left behind and health protocols can still be applied.

A classic wayang or shadow puppet show in English on the story of Jarasandha from Mahabharata was held at Wilton's Music Hall London on Friday (20/11). The show led by Ki Sujarwo Joko Prehatin was accompanied by the Greater London Gamelan Prayers. Ki Sujarwo Joko Prehatin told Antara after the show that the three-hour performance was held online on Instagram Live and Indonesian Embassy's YouTube chanlle, and all was following the health protocol.

Most of the Gamelan players are British citizens from various gamelan groups in England namely Oxford and Cambridge. The sinden or singers who accompanied the show were Cathy Eastburn, Cecily, and Aga Ujma. A gamelan player Peter Smith from Oxford said he was happy to play gamelan again since the lockdown.

Education Attaché of Indonesian Embassy in London M Arif Rokhman who watched the performance said the show was very entertaining because in this hard times, the players still followed the health protocol.

Minister of Foreign Affairs of the Republic of Indonesia, Retno Marsudi said that amid the Covid-19 pandemic, organized crime continues to occur, even in the health aspect, such as drug counterfeiting and cyber-attacks on vital health infrastructure. This was expressed by Minister Retno Marsudi in her speech at the 20th anniversary of the United Nations Convention against Transnational Organized Crime (UNTOC). The commemoration was held virtually from the UN Headquarters in New York on Friday (13/11). The website of the Ministry of Foreign, kemlu.go.id reported that this commemoration was also attended by UN Secretary General, Antonio Guterres, President of the UN General Assembly, Volkan Bozkir and UNODC Executive Director, Ghada Waly.

Minister Retno Marsudi also said that to face the challenge of transnational organized crime, she emphasized that the first thing to understand is that the characteristics of transnational organized crime tend to differ from one country to another country. So, the approach taken must be situational. The second point is the importance of building and maintaining cooperation among countries globally. According to Minister Retno, no country can solve this problem alone, both before and amid the Covid-19 pandemic. Minister Retno also specifically touched on the issue of Rohingya refugees as a form of organized human smuggling and trafficking in the region. Currently, Indonesia is hosting more than 900 people who have been victims of human trafficking and stranded on the high seas. Indonesia re-emphasizes the importance of solving the Rohingya problem from the root of the problem through voluntary, safe and dignified repatriation. She also said that for Indonesia, Myanmar is the home of the Rohingya refugees.

The third point is that the approach and solution taken must continue to adapt according to the characteristics of the crime. In this regard, Minister Retno reiterated the importance of continuous adaptation so that UNTOC remains always relevant in overcoming organized transnational crime both now and in the future.

The United Nations Convention against Transnational Organized Crime (UNTOC) was adopted in Palermo, Italy in 2000. The convention is the main international legal instrument regulating the problem of combating trafficking in persons, people smuggling and the illicit trade in firearms. Indonesia has been a party to the Convention since 2009. Indonesia was chosen to be one of the joint sponsors of Italy and Morocco at the 20th anniversary of the adoption of UNTOC which was initiated by the United Nations Office on Drugs and Crime (UNODC). The offer as the only sponsor from Asia shows international recognition for Indonesia's major role and leadership in the effort to combat transnational organized crime.