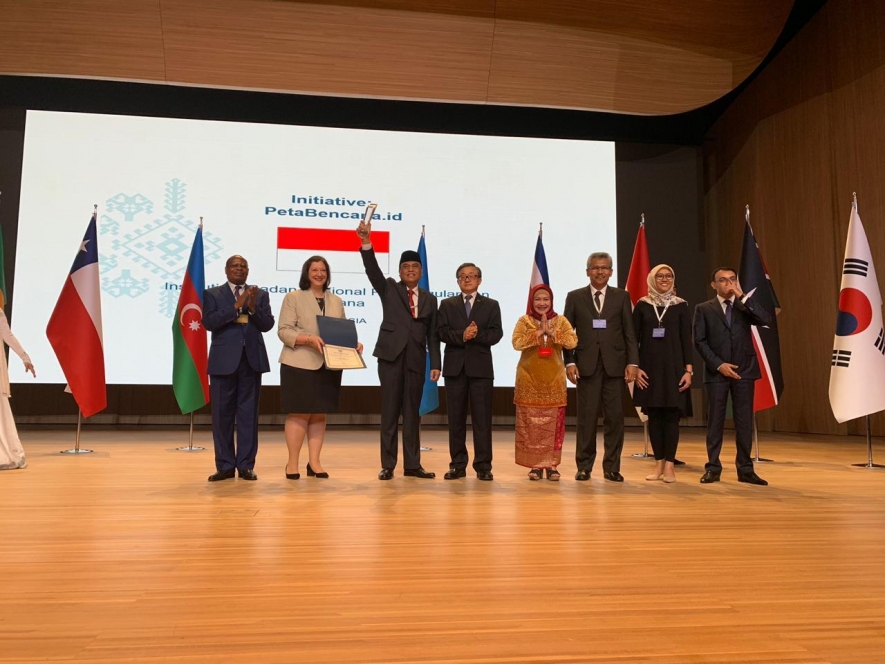 PANRB Minister Syafruddin raised the award given by the United Nations for the PetaBencana.Id platform, at Heydar Aliyev Center, Baku, Azerbaijan, Monday (24/6). kemensetkab

"Congratulations on the award that BNPB has received, hopefully this innovation can continue to be developed and useful for the people of Indonesia," Syafruddin said after the event.

The PANRB Minister considered that this award was concrete evidence that the Indonesian nation was increasingly responsive to the progress of public services. With this award, continued the Minister of PANRB, Indonesia is increasingly recognized by other nations through UNPSA.

The participation of innovations from Indonesia in UNPSA has been carried out since 2014, by presenting five innovations as finalists. In 2015, there were two runners up and three finalists in the UNPSA. Three years later, namely 2018, the EDAT System won the prestigious event. In 2019, an innovation from Indonesia by BNPB again won the UNPSA. "This is a momentum so that Indonesia is increasingly valued in the world," Syafruddin continued.

PetaBencana.id is a free website-based platform that produces spatial visualization of disaster information in real time. This platform utilizes the use of social media and instant messaging during disaster events to collect and filter the current conditions confirmed by residents in the locations around the incident

The platform, formerly PetaJakarta.org, was developed by BNPB with the Massachusetts Institute of Technology (MIT), USAID, Pacific Disaster Center (PDC), Humanitarian OpenStreetMap Team (HOT) and BPBD DKI Jakarta. During a flood in Jakarta 2017, this platform can quickly collect flood data and information quickly and realtime. At that time, thousands of people reported flooding and PetaBencana.id was accessed by more than 500 thousand users in less than 12 hours, so the impact of the disaster was quickly mapped.

When weather patterns become increasingly unpredictable, cities in Indonesia are routinely faced with the challenges of extreme weather events. Lack of access to valid and real-time information results in the ability for BNPB to create innovations that serve to map disaster areas and predict conflicts that will arise.

By providing valid disaster information, it allows people to save themselves and share that information. PetaBencana.id utilizes all residents, to participate in this platform through social media and instant messaging. The power of social media is used to get reports of disaster events quickly. In accordance with the principles and principles, disaster management must be carried out quickly and precisely.

This platform is designed to operate together with other existing platforms, such as messaging applications, social media, and short messages. This innovation is intended for the general public, especially the lower middle class and the community with limited access to facilities. Since its launch in December 2015, PetaBencana.id has been accessed 737,102 times by 361,478 users.