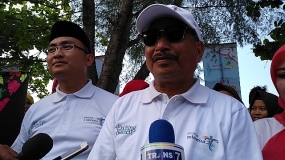 Tanjung Lesung as one of the special economic zones starts attracting the attention of domestic and foreign tourists. The Tanjung Lesung Wonder Festival, that has taken place from 28 to 30 September 2018, presents a variety of events. One of them is Rhino X-triathlon. To the Voice of Indonesia, Friday (28/9) in Tanjung Lesung, Minister of Tourism, Arif Yahya remarked that to reach the target of one million foreign tourists, Tanjung Lesung will be supported by the central government through the necessary infrastructure development.

"The most needed is access. So, toll access is the most important that we are waiting to be completed  in 2020. In 2019, section  One will be completed. The second one is railroad revitalization. We hope that the location of the airport is available as proposed this year by the Banten provincial government. From the beginning, we have set one million foreign tourists to Banten. If there are one million tourists, this means that one billion US dollars is circulating here, especially in Pandeglang. If there is around Rp. 14 trillion, we believe that the economy here will move quickly,” said Arif Yahya.

Furthermore, Minister Arif Yahya explained that his side has also prepared Tanjung Lesung's human resources with various facilities that are able to support the Tanjung Lesung community to be able to manage tourism objects professionally by using information technology. (VOI/Nuke/Trans by R) 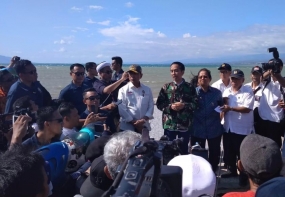 Written by Ani Hasanah
Published in Indonesia Today
Read 486 times
The Balaroa National Housing Complex, which is one of the villages affected by the earthquake, was severe enough to be the first place visited by President Joko Widodo in Palu, Sunday, September 30, 2018.
The people who saw the President's arrival at the location immediately surrounded him. The President also took time to talk with the residents.
"So this is indeed an emergency because many roads are cut off, the airport is also closed. Only electricity from 7 new substations that works. (Supply) of fuel is also (hampered due to) closed roads," said the President at the location.
Regarding the supply of fuel oi, the President estimates that in two days it will reach the location. Heavy equipment from Mamuju, Gorontalo according to him also has moved towards the disaster site.
"We pray that the heavy equipment will arrive smoothly tonight," he continued.
Likewise related to food and water that are hampered. The President said this was due to the condition of the airport that was not 100 percent ready to be used by the aircraft to land.
"I hope the community is patient all. I know many problems that must be resolved in the near future, including relating to communication," he said.
Quoting the official release of the National Disaster Management Agency (BNPB), the power outages caused the communication network in Donggala and surrounding areas to be unable to operate because PLN's electricity supply was broken.
There are 276 _base stations that cannot be used. Communication operators continue to try to recover electricity supply on an emergency basis. The Ministry of Communication and Information has taken measures to recover the broken communication.
At the end of the conversation, the Head of State said he would continue to follow every development related to the handling of the post-earthquake and tsunami disaster.
"I will continue to follow this, all will return. After normal, the rehabilitation and reconstruction of houses like this is normal," he said. (Release Of Protocol, Press and Media, the Presidential Secretariat)
Read full article
Twitter 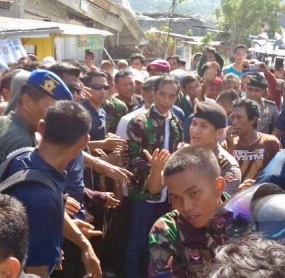 Written by Ani Hasanah
Published in Indonesia Today
Read 464 times
Upon arrival at Mutiara Sis Al Jufri Airport, Palu City, on Sunday, September 30, 2018, President Joko Widodo immediately led a limited meeting (ratas) with a number of his staff related to the earthquake and tsunami disaster that hit Central Sulawesi.
Arriving at 1:06 p.m. local time, the President was welcomed by the Coordinating Minister for Political, Legal and Security Affairs Wiranto, TNI Commander Marshal Hadi Tjahjanto, and National Police Chief Gen. Tito Karnavian. In addition, the Governor of Central Sulawesi, Longki Djanggola, Central Sulawesi Police Chief Brigadier General Ermi Widyatno, and Commander XIII / Merdeka, Maj. Gen. Tiopan Aritonang also welcomed the President.
The President then headed to a room at the airport and immediately  held a limited meeting with the Central Sulawesi Governor, Coordinating Minister for Politics and Security Wiranto, Minister of Social Affairs Agus Gumiwang, Minister of Transportation Budi Karya Sumadi, Minister of Public Works and People's Housing (PUPR) Basuki Hadimuljono, Head of National Mitigation Agency (BNPB) Willem Rampangilei, and Head of the National Search and Rescue Agency (Basarnas) Middle Marshal TNI M Syaugi.
After the meeting, the President, who wore TNI's green-black camouflage jacket, then gave directions to the Indonesian Military (TNI) soldiers in the courtyard or airport terrace. In particular, he requested the readiness of the TNI soldiers to work hard in the evacuation stage.
"I ask all of you to be ready to work day and night to complete the evacuation. Are you ready?" the President said.
"Ready!" Replied the TNI soldiers.
In addition to evacuation, the Head of State also requested the readiness of TNI members to assist the rehabilitation and reconstruction process in Central Sulawesi.
"You have also work hard together with the community, with all components of the National Police, the community and all institutions and ministries so that we can all immediately solve the problems in the province of Central Sulawesi," he said.
From the airport, the President and his entourage immediately moved to review a number of points affected by the disaster.
The first point to visit was Perumnas Balaroa and arrived at 1:55 p.m. At this location, the President reviewed the location of the rubble and handed over the aid.
The next place to be reviewed by the President was Talise Beach. This beach is the main tourist spot in Palu and the most affected by the tsunami.
The President then headed to the Undata Hospital and finally the President review the refugee post in Vatulemo Square. (Release by Protocol, Press and Media, the Presidential Secretariat)
Read full article
Twitter 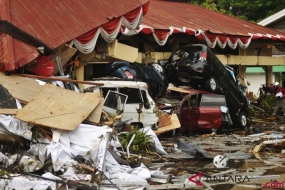 Written by Ani Hasanah
Published in Indonesia Today
Read 269 times
Japanese Foreign Minister Taro Kono has offered condolences and sympathy through the Indonesian Foreign Minister Retno Marsudi over the earthquake and tsunami that hit Central Sulawesi on Friday.
Minister Taro Kono conveyed his deep condolences to all the families of the dead victims, according to a statement from the Japanese embassy in Jakarta.
"I express my condolences to the government and all the people of Indonesia for the earthquake and tsunami disaster that caused significant loss of life and damage on the island of Sulawesi on September 28, 2018," Minister Kono remarked.
The Japanese government said it was ready to provide assistance to the Indonesian government in any form to deal with the impact of the earthquake.
"I pray that the injured victims of the disaster can be recovered soon and places that have been damaged by the disaster are quickly restored," Kono said.
In addition, expressions of condolences were also conveyed by a number of government representatives from friendly countries including Britain, Australia, France and Denmark.
British junior minister for Asia Pacific Affairs Mark Field through his Twitter account @MarkFieldUK expressed deep condolences to all communities affected by the tsunami and earthquake in Indonesia.
"Our prayers are with family and relatives of the victims," Mark said, which was uploaded by the British Ambassador to Indonesia, Moazzam Malik.
Meanwhile, Australian Prime Minister Scott Morrison said in his Twitter account @ScottMorrisonMP, "very sad to hear the tragic events that occurred in Sulawesi".
By calling President Joko Widodo @jokowi`s Twitter account, Morrison conveyed Australia`s readiness to assist post-disaster recovery efforts.
The condolences were also conveyed by the French Ambassador to Indonesia Jean-Charles Berthonnet through his Twitter account @JCBerthonnet, as well as the Danish Ambassador to Indonesia Rasmus A Kristensen through the @DubesDmarkmark account.
The Meteorology, Climatology and Geophysics Agency (BMKG) recorded a 7.4 magnitude earthquake which occurred on Friday (Sept 28) at 05:02 p.m. local time, triggered a tsunami as high as 0.5 to six meters on the west coast of Central Sulawesi. (ANTARA)
Read full article
Page 621 of 923
Home