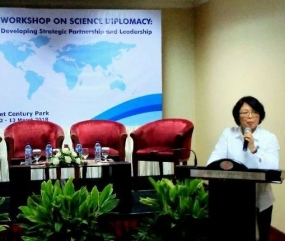 Science Diplomacy Must Give Solution to Global Issues

Science Diplomacy has important thing for global change with the existing issues in many countries. Science plays role in building trust and relation among countries. It was stated by Acting Chairman of Indonesian Institute of Sciences (LIPI) who is represented by Deputy of Social Sciences and Humanities, Tri Nuke Pudjiastuti at Workshop on Science Diplomacy in Jakarta on Monday (12/03).   Tri Nuke said science becomes a bridge to boost international cooperation in providing solution of issues such as poverty.

“If we see global order, we can see there is Multi-Stressed zone in Africa, Asia and part of Europe and America. What is happening if we mention Multi-Stressed zone? There are big issues, water problems, demographic and hunger problems, coastal issues, even conflict. Those are global issues and have been big challenges that we have not been able to overcome,” Tri Nuke Pudjiastuti.

Moreover, Tri Nuke Pudjiastuti explained related to the importance of science diplomacy, LIPI is continuously participating by sending more than 500 researchers to several foreign countries to boost international cooperation. She said science has a role in one country’s geo-politic and geo-strategic context.(VOI/Ahmad  Faisal/AHM) 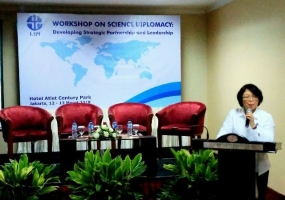 Indonesian Institute of Sciences (LIPI) prioritizes its research in the field of food, energy, maritime, biodiversity and so on. The priorities are related to the reference of the sustainable development goals. It was said by Deputy of Social Sciences and Humanities of LIPI, Tri Nuke Pudjiastuti on the sidelines of Workshop on Science Diplomacy in Jakarta on Monday (12/03) to Voice of Indonesia. She said the research priority has become a challenge for LIPI so that its research can be explored by others.

“The upcoming challenge for LIPI is how to deliver the research outcome to national and global stakeholders in which it is not bilaterally, but multilaterally and here LIPI is building multi-polar in a position as the second track. It is the big power we have,” Tri Nuke said.

Tri Nuke explained the research output of LIPI must provide solution of the problem being researched, so it will give positive impact for Indonesian interest in particular, and can be beneficial for world's interest. (VOI/Ahmad Faisal/AHM) 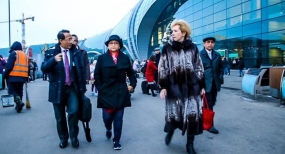 #FMMarsudi met Damir Gizatullina, Vice Chairman of the Russian Moslem Council, in Moscow (12/3), called on the Russian Muslims joining their Indonesian brothers to disseminate peace and tolerance values. She arrived in Moscow after a visit to Singapore the day before.

She will attend a bilateral meeting with her Russian counterpart, Sergei Lavrov and discuss the strengthening of bilateral cooperation between Indonesia and Russia and the planned visit of Russian President Putin to Indonesia. Minister Marsudi will stay in Russia until 13 March.

Indonesia has lauded the promotion activity of Asian Games 2018 in Bac Nich Province, Vietnam, on Sunday."Asian Games Fun Run is held in Bac Nich Province, Vietnam to promote Asian Games 2018. The event was participated in by 3,000 participants from various social backgrounds," Secretary General of The 2018 Indonesian Asian Games Organizing Committee (INASGOC) Eris Herryanto said in a written statement received  in Jakarta on Monday ( 12 /3 ). The Asian Games Fun Run was also attended by 600 students in the province. The activity also showcased local arts and cultures as well as socialized the Olympic and Asian Games involving 400 elementary school students in Vietnam.In addition, Deputy Director of Bac Ninh Culture, Sports and Tourism Department Nguyen Duang Bac stated that the event taught modern Olympic values such as brilliance, friendship and mutual respect for a better life. Coordinator President Office of Olympic Council of Asia (OCA) Trkmani Wissam remarked that friendship and teamwork were important values of sports activities in the Asian continent.The OCA will also host Asian Games Fun Run in other countries such as Saudi Arabia, Macao, Nepal, Oman, Kazakhstan, Tajikistan, Mongolia, China, Japan, Thailand, Iran, South Korea and Timor Leste.The regional government of Jakarta earlier expressed optimism in completing the construction of all infrastructure projects for the 2018 Asian Games on time, an official stated."In general, those construction projects are being implemented in line with the schedule, and they certainly can be completed on time before the Asian Games begins," Jakarta Government Secretary Saefullah remarked.Saefullah pointed to some significant progress in the Jakarta Light Rail Transit (LRT) whose construction has currently reached 63 percent completion."Hopefully, it would be able to reach 95 percent completion by July 2018, so we can operate it in August 2018," he noted.The Jakarta LRT will connect the Jakarta city center with suburbs in Greater Jakarta, such as Bekasi, Bogor, and Depok, where some Asian Games venues are located. The construction work on the Jakarta International Equestrian Park in Pulomas, East Jakarta, is on schedule and has reached 90 percent completion. During the finishing phase, Saefullah has also urged contractors to renovate the areas surrounding the Asian Games venues to increase the aesthetic appeal despite the Jakarta government being in charge of it. ( antara )