This is RRI World Service -Voice of Indonesia with Mosaic of Indonesia. In today’s edition, we will present you three items of information. The first one is that 15 Javanese lorises are ready to be released at forest in Ciamis. Unsyiah students create electric car for competition in Singapore. We end Mosaic of Indonesia on regional office of Law and Human Rights’ ministry of North Sulawesi deported 15 Filipinos.

Javanese lorises are ready to be released at Mt. Sawal, Ciamis regency, West Java province after rehabilitation process since they were confiscated from animal trade syndicate. Manager Animal Care International Animal Rescue of Indonesia, Prameswari Wendi during the process of habituation of 15 lemurs at the Mt. Sawal Wildlife Reserve in Ciamis, West Java on Tuesday said that all animals underwent long rehabilitation process. The process began from quarantine, medical examination, behavioral observation, feed enrichment until they are declared healthy to be released. Prameswari also explained that the habituation was the last step for the lemurs before being released at the forest as habitat of protected primate animals. The slow lorises that consist of five males and 10 females were secured by the police in Tasikmalaya and Bandung, West Java in 2016.

Director of IAR Program of Indonesia, Karmele L Sanchez added that even after being released, the staff will monitor the animals’ activities by using special tool to observe every development, beginning from behavior, exploring area, sociability and survival from predators. After six-month release, they are monitored. The monitoring process will be helped by radio transmitter. They are equipped with collar radio which will emit signal to receiver radio.

The conservation program of the lorises at Mt. Sawal is cooperation between Central Conservation of Natural Resources, West Java and IAR Indonesia. The program is an effort to support the ongoing ecological processes within the region, as well as to safeguard and increase the population of primates as endemic species that continue to decrease in number.

The next information is that Unsyiah student creates electric car for competition in Singapore.

We end Mosaic of Indonesia on regional office of Law and Human Rights’ Ministry of North Sulawesi deported 15 Filipinos.

Head of Immigration Division of Regional Office of Law and Human Rights Ministry of North Sulawesi, Dody Karnida explained as quoted by Radio Republik Indonesia on Tuesday (6/2) that for the first step, 4 Filipinos were deported on Thursday, February 1 through Sukarno-Hatta airport to Manila. Meanwhile, 11 Filipinos are scheduled on February 14. Dody added that the deportation has been through procedure, beginning from notification to representatives of the Philippines and to be continued by verification which recognizes their citizenship. Then, they are given travel documents which are completed with ID cards. Dody Karnida made sure that they are in good condition. We begin with Kompas entitled, “Moment to Revitalize Puncak”

After three days, the search of landslide victims in Riung Gunung, Puncak, Bogor, West Java was stopped on Wednesday (7/2) evening. There was not clear evidence on more victims still being under the landslide. However, the emergency period still continues until the next 10 days until February 18. Public Works and Public Housing Ministry is expected to immediately finish the road normalization after landslide. During this period, four-wheeled vehicles cannot pass through the Jakarta-Cianjur main road. Bogor Regency Disaster Mitigation Agency BPBD’s Emergency and Logistic Division Head, Sumardi at the slide location said that 60 personnel of BPBD will still be posted at Riung Gunung.

The government is forming presidential regulation on alms collection amounting to 2.5 percent of Muslim State Civil Apparatus’s monthly payment. Indonesian Religious Affairs Minister, Lukman Hakim Saifuddin said, the alms collection is not compulsory. That was said by the Minister in a press statement at the Religious Affairs Office in Jakarta, on Wednesday (7/2). He reasons that the Muslim State Civil Servants who object the alms collection can file request to their ministry or institution. The mechanism of request must be written.

We end today’s Headline with Media Indonesia, “Puncak Revitalization Must Not Be Just a Plan”.

The seriousness of the central government in revitalizing Puncak area, Cisarua, Bogor Regency, is crucially needed after the landslide in the area. The plan affirmed by Public Works and Public Housing Minister Basuki Hadimuljono on Tuesday (6/2) is expected to be realized soon, and not ended as a plan only. Bogor Agricultural Institute’s spatial planning and environmental researcher, Ernan Rustiadi did not believe that the regency’s government had political willingness to revitalize Puncak. Because, for the regency government, Puncak area is merely for tourism, and is focused on its economic function, not their protection functions. Meanwhile, House of Representative’s Commission IV member, Firman Soebagyo in Jakarta, Wednesday (7/2) expects the central government to take over the Puncak revitalization, and to create special body for the revitalization. Firman said, in short term, House’s Commission IV plans to have a meeting with the government on the revitalization.

Welcome to the segment of My Indonesia. The title of today’s edition is ‘Indonesian President Joko Widodo Recognizes Significant Progress in Handling Land and Forest Fire’.

In a Coordinating Meeting of Forest and Land Fire Control 2018 which took place in Jakarta on Tuesday (6/2), President Joko Widodo reiterated the commitment of governors, regents, mayors, TNI leaders and Polri leaders in their respective areas to protect their territory from fire. The statement  was conveyed by the President, considering that this year's weather conditions are  estimated to be drier compared to last year. All parties are demanded to be prepared. In addition, along with the implementation of the Asian Games in August, Indonesia is predicted to enter the dry season. President Joko Widodo asserted, this is betting of Indonesia's reputation in the eyes of the international world, if there is smoke that may disrupt the implementation of Asian Games event. Moreover, the President also said that land and forest fires can be prevented if all parties can work together, so that it is no longer to become national disaster and international spotlight.

Learning from forest and land fires in 2015, President Joko Widodo greatly appreciated, within two years there has been a significant progress in controlling the case. He said, there is a very significant reduction of hotspots. By 2015, the number of hotspots reached 21,929 points, in 2016 down to 3,915, and in 2017 down to 2,567 hotspots.

President  Joko Widodo said that at the Asian Summit, the Prime Minister of Malaysia and Singapore usually complained about smoke.  But this year, Indonesia received appreciation from the two countries. Learning from the forest and land fires in 2015, the Indonesian government has established Early Detection System of Fire Prevention since 2017. In the system, there has been shown daily hotspot data and fire map. The people can access through sipongi.menlhk.go.id  page. In addition, an integrated system has also been built among the related stakeholders in handling the land and forest fire.

The Ministry of Environment and Forestry in cooperation with the Meteorology, Climatology and Geophysics Agency (BMKG) and the National Aeronautics and Space Agency (LAPAN) have facilitated detection and monitoring. The regional governments and businesspeople have conducted fire prevention efforts with standard operating procedures (SOPs) that are defined in terms of facilities and personnel and unfueled land clearing techniques. They also establish and foster a fire-caring society (MPA), so that people are aware of the importance of self-prevention efforts. 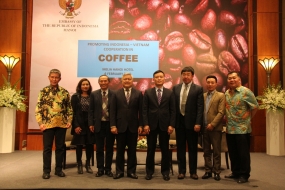 Indonesia is the fourth largest coffee producer in the world after Brazil, Vietnam and Columbia. Through business forum of “Promoting Indonesia – Vietnam Cooperation in Coffee", the Indonesian embassy in Hanoi along with Vietnam Coffee – Cacao Association (VICOFA) on February 6, Indonesian coffee started its market in Vietnam’s potential market.  Indonesian Ambassador to Vietnam, Ibnu Hadi said that the forum is aimed to promote the opportunity and to cooperate in reaching the target of bilateral trade worth $10 billion dollars in 2020. In 2017, Indonesian and Vietnam’s total trade increased 16.36 percent to become $6.50 million dollars from $5.58 million dollars. The forum was attended by ambassadors from neighbor countries, coffee industry players/ Indonesian entrepreneurs and Vietnamese companies. The invitees appreciated positively the Indonesian coffee and the forum was filled with coffee cupping Specialty Coffee. The forum ended with business matching between Indonesian and Vietnamese entrepreneurs.

Russia and Indonesia will immediately approve the technical details of the Sukhoi Su-35 fighter jet delivery contract. The Sukhoi delivery is a form of military’s cooperation between Russia and Indonesia. This was stated by Vice Director of Russian Federal Service for Technical and military’s cooperation, Mikhail Petukhov, as reported by Russian News Agency website which was quoted by Republika on Tuesday (6/2). According to Petukhov, the experts of the both sides will immediately prove technical aspect which is separated. Before being reported, Indonesia planned to buy 10 multi-function Sukhoi jets of Su-35 to replace Tiger F-5 made in the United States of America, which has operated since 1980. Then, hi-tech Rusia Rostec Company reported that Indonesia has received a commercial offering for 11 fighter jets of Su-35. Sukhoi Su-35 is multi-war fighter, heavyweight, and has high cruising range. 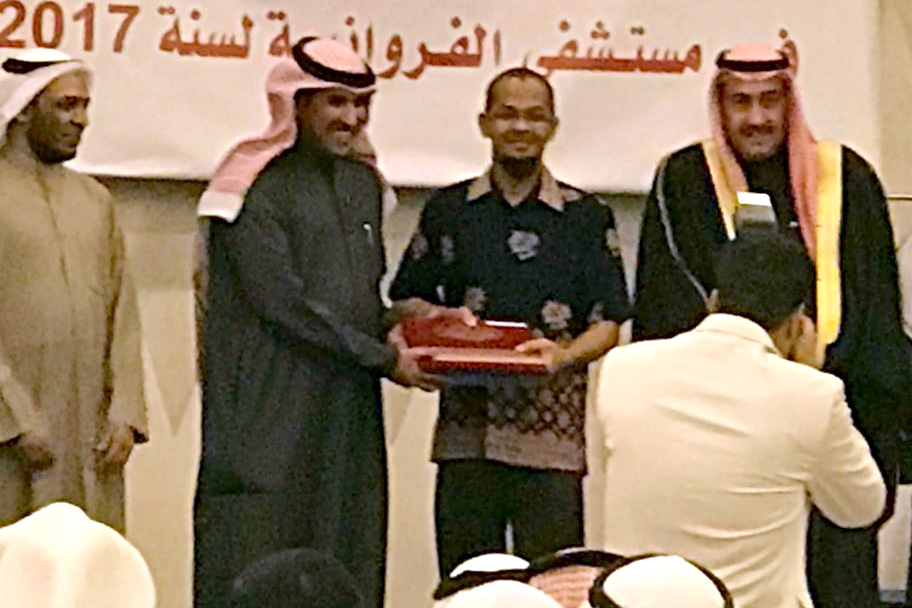 An Indonesian Diaspora who works as nurse of Health’s Ministry in Kuwait received an award as the best Staff Nurse 2017 at Farwaniya hospital. He is Suparman, a nurse who succeeded to give good image of Indonesian nurse in Kuwait, especially Farwaniya region. The nurse is known as a person who is friendly, religious and responsible for his job which is assigned on him at medical room. The awarding event was attended by Governor of Farwaniya province, Sheikh Faisal Al-Hamud Al-Malik Al-Sabah. The Indonesian nurse has shown his ability to compete with his co-nurses from many countries. Last month, Ali Pulungan also received an award as the best nurse staff and Agung Setiadi was as the third best nurse staff.