Welcome to “Indonesian Wonder,” a daily segment featuring tourism, culinary arts, fine arts and culture from various regions across Indonesia. In today’s edition, we will introduce you to a tourism object in Alor, East Nusa Tenggara, namely Tuti Adagae fountain.

Tuti Adagae hot spring is easy to access by using motorcycle or car. Because, it is supported with good condition of road to the location. Trip from Kalabahi city to the tourism object takes around one hour. Before entering the location, the visitors will be spoilt by walnut forest’s scenery and also shady trees which are suitable for relaxing along with family. it is different from other hot springs in general. At Tuti Adagae hot spring complex, there are two locations of hot springs whose locations are not far apart and at the middle of river stream. The water of the first hot spring comes out from earth, which sounds like big motorcycle as if welcoming the visitors and it’s ready to accompany the visitors at the location. But the visitors are allowed to touch it. Its water is very hot.

The second hot spring is located around 50 meters from the first one. The hot spring here spurts from sediment of small stones that has been hardened with height more than one meter at around the hole and it has beautiful orange color. At the second hot spring, its water is friendlier because it can be used by visitors to take a bath and to release fatigue after travelling.  In addition, the visitors can also enjoy the beauty of Tuti Adagae hot spring whose stream flows slowly to estuary and always releases bubble, foam and warm water. The warm water may be more comfortable if the visitors stand at the edge of the river. This hot spring contains of sulfur. So, the local residents believe that taking a bath at the river can cure skin disease. Beside the spurt point, there is also spout points from the bottom of the water, such as small spring which always releases hot water.  Here, small animals cannot also survive if they are close to the stream.

Tuti Adagae hot spring has unique phenomenon. It spurts hot water and crystal stone, which makes this area become attractive for people who are bored with city’s situation. Thus,  Tuti Adagae hot spring is very appropriate for any visitors to be the right destination to visit if they are in Alor.

Today in History over RRI World Service, Voice of Indonesia. We start from an event on May 26, 1966 when Guyana gained its independence.

Guyana located in the North of Latin America liberated itself.  Guyana was discovered by Spanish sailors around the 5th century ago. So, Spain became Guyana’s colonialist. In early 18th century, great war occurred among European countries to occupy Guyana, Suriname, Venezuela, and a number of Brazilian regions. In 1815, the Vienna agreement was signed by countries involved in the war. In the agreement, region’s borders, which were disputed by colonial countries, were determined. In the division, Guyana became territory of British colony. Finally, Guyana gained its independence on May 26, 1966. However, at that time, Guyana’s status was still as member of Commonwealth. In 1970, Guyana really released all relations with colonial country, namely Britain.

The next event is that in 1972, the United States of America and Soviet Union signed agreement of Anti-Ballistic Missile.

And the last event is that in 2005, Radius passed away.

Dr. Radius Prawiro was an Indonesian economist and politician. His economic and political career began as the Secretary of the People’s Security Committee  in Yogyakarta in 1945 and continued as TRI Liaison Officer in Yogyakarta. He was the Staff of the Military Governor of the Yogyakarta and worked as a Technical Officer in the National Accounting Office. Then, he held the position of Deputy Minister for the National Audit Office of Indonesia, Deputy Minister for Central Bank, Governor of the National Bank of Indonesia, Governor of the Bank Indonesia, and served concurrently as Governor of the International Monetary Fund and the Vice-Governor of the Asian Development Bank for Indonesia from. Radius became a member of the President’s Economic Expert’s Team, and served as Head of the Governing Committee of the World Bank. He was then appointed Minister of Trade in both the Second Development Cabinet and the Third Development Cabinet, Finance Minister in the Fourth Development Cabinet and was Coordinating Minister of the Economics, Finance and Industry and Development Supervisory Board. He recorded his views of economic policy in Indonesia in a useful book ‘Indonesia's Struggle for Economic Development’ published in 1998. Radius Prawiro died in Germany on May 26, 2005 due to heart disease.

RRI World Service -Voice of Indonesia. It’s nice to meet again in Music Corner, a musical segment that introduces you to Indonesian Music. In today’s edition, we will present various Indonesian religious songs.

“Pada-Mu Ku Bersujud” composed by Afgan was released when welcoming Ramadhan in 2008. This song was Afgan’s first religious single. The song depicts that no human being is free from sin intentionally or not. Afgan himself thought Ramadhan is a month of forgiveness.Therefore, we all have to improve ourselves and ask forgiveness for all the sins committed.

“SemuaKarena Allah” sung by Astrid in collaboration with the HijauDaun personnel, Dide song was intentionally created to welcome Ramadhan in 2011. The song  reminds humankind to always be grateful and to always worship to Allah only because all the blessings that are given come from the Almighty, and whatever the human does must be something that Allah blesses. 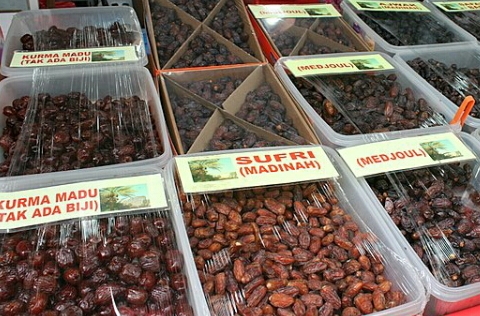 RRI World Service Voice of Indonesia with a daily segment My Indonesia which today is on "Supporting Palestine, Indonesia Exempts Dates and Olive Import Duty".

Indonesia removes tariffs for certain Palestinian products. For the initial phase, Indonesia will exempt the tariffs of dates and olive oil originating from Palestine. This is a form of Indonesian support for the Palestinian struggle in the economic sector.

Indonesian Minister of Trade Enggartiasto Lukita conveyed it when meeting Palestinian Ambassador Zuhair Al-Shun in Jakarta, Tuesday (22/5). He said, in the future other products will be selected and agreed by both parties.

The Minister of Trade said this meeting as a follow-up to the signing of a memorandum of understanding concerning the preference for the exemption of import duty tariff of 0% for certain products from Palestine. The signing of the MoU was conducted at a bilateral meeting between the two countries on the sidelines of the 11th World Trade Organization - WTO Ministerial Conference on December 12, 2017.

According to Minister Enggartiasto, Tuesday's meeting was the first with the Palestinian ambassador since his assignment in Indonesia in November 2017. Ratification of the MoU has been completed with the issuance of Presidential Decree no. 34 of 2018. However, this Memorandum of Understanding has not been implemented because the technical guidance of Implementing Arrangement has not been signed by both parties.

The Implementing Arrangement draft exchanges had been conducted several times and Indonesia submitted its last draft on 26 January 2018. If it has been signed by both parties, Indonesia will soon issue a Regulation of the Minister of Finance as the implementing rule for elimination of dates and olive oil tariffs.