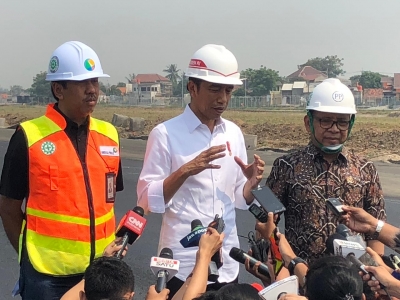 President Jokowi was accompanied by Minister of State Secretary to answer reporters abruptly reviewing the progress of the construction of the third runway at Soetta Airport, in Cengkareng, Tangerang, Banten, Friday (6/21)  morning. kemensetkab

On his 58th birthday, President Joko Widodo (Jokowi) continued to fill it with work. Accompanied by Minister of State (Minister of State) Pratikno, President Jokowi suddenly reviewed the progress of the construction of the  runway 3 at Soekarno Hatta Airport (Soetta), Tangerang, Banten, Friday (6/21) morning.

"We see that this  runway  3 at Soekarno Hatta has already finished 86 percent. We expect 100 percent by the end of this month, and it will be operational as soon as possible. Maybe July  will be already operational, "said President Jokowi.

If the third runway of Soekarno Hatta Airport is operated, according to the President, we will have 120 aircraft movements every hour, up 50 percent compared to the current 81 movements. Thus, requests from airlines from other countries that have been queuing, from Qatar, Saudi, India, Singapore, Malaysia, China, Japan, all of which want to enter but are already full of slots, can now be added to enter Soekarno-Hatta. again.

"We hope that it will not be like yesterday, if we want to go down for half an hour, it's not there after it's finished. God willing, it doesn't exist. That is, the additional large capacity is immediately closed because the replacement is long, "continued the President.

After this, according to the President, the government will enter additional capacity for the terminal. He claimed that he had ordered the Transportation Minister and Director of PT Angkasa Pura II two years ago to prepare another fourth terminal plan.

"This has already started with the pictures, designs already. We hope that later in 2021 the fourth terminal will also be built again. Three years completed. So that we will expect a total of 110 million passengers here with a fourth plus terminal, "said President Jokowi.

President Jokowi admitted that indeed the flight growth was very fast. Therefore, if the construction of the runway, development such as east cross taxiway is not pursued, the terminal construction is not pursued, we will just go ahead again. "This is what we don't want. Infrastructure must overtake existing growth, "he said.

While related to supporting infrastructure towards the terminal at Soekarno Hatta Airport, according to President Jokowi, if indeed there is now an airport train. You can later use LRT to get to the airport, or the fast train will continue to Soekarno-Hatta.

"We are racing with a speed of growth," said the President. (kemensetkab)

More in this category: « President Jokowi Optimistic In 2025 All Indonesian Land Certificates Will Be Completed Meeting Aung San Suu Kyi, President Emphasizes the Importance of Security at Rakhine State »
back to top
Home