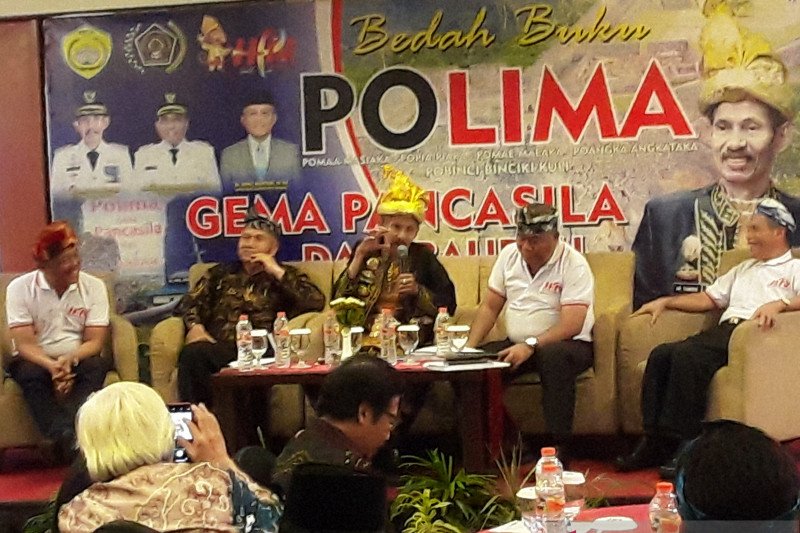 Baubau Mayor A.S.Tamrin spoke at his book launching event in Banjarmasin, the capital of South Kalimantan Province, on Saturday (Feb 8, 2020).

Taking place at a hotel in downtown of Banjarmasin, the capital of South Kalimantan Province, on Saturday, the book launch event was part of the commemorative programs of the 2020 National Press Day's Anniversary. The book that he wrote along with two ANTARA journalists and a former journalist of Tempo news magazine, is part of Tamrin's ongoing endeavors to implement a cultural approach and strategy in developing his city and improving the prosperity of his people over the past eight years of his leadership in Baubau. In implementing the culturally-based development approach, Tamrin revives and re-internalizes the genuine cultural and philosophical values as well as local wisdom, deeply rooted in the lives of the people of Buton Island from generation to generation since the early era of the Kingdom of Buton in Southeast Sulawesi. "The values of 'Polima' are compatible with the basic principles of our State Ideology Pancasila," he told the attendants of the book launching event that was officially opened by the representative of the Indonesian Journalists Association (PWI) Central Executive Board, Professor Rajab Ritonga. The five "Po" values comprise "pomaamaasiaka" (love one another), "popiapiara" (care and protect one another), "poangkaangkataka" (respect and support one another for human dignity), "pomaemaeka" (feel ashamed of doing wrongdoings), and "pobincibinciki kuli" (do not hurt one another), he explained. Tamrin said the implementation of these "Polima" values is not just necessary for administering the city government and residents, but it may also help to strive President Joko Widodo's mental revolution initiative as a key to changing the mindset of Indonesians. The book launch was followed by a book review by three leading experts of the Public Administration Institute (IPDN), including Professor Ermaya Suradinata, Professor Khassan Effendy, and dan Dr. Sampara Lukman, MA. (ANTARA)

Bogor to Build Two Training Fields for U-20 World Cup 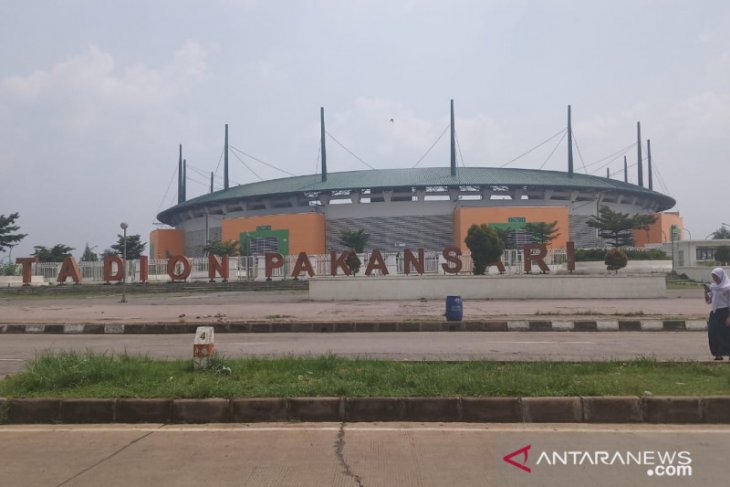 The government of Bogor Regency, West Java, will build two training fields for the 2021 U-20 World Cup, after Pakansari Stadium, Cibinong, was officially designated as one of the venues for the international sports event. The two international-standard fields will be developed in the archery field near the Pakansari Stadium and PPOPM Athlete Complex in Karadenan Village, Cibinong. "Based on the visit of the Ministry of Public Works and Housing as well as Indonesian Soccer Association (PSSI), we are required to build two training fields to support teams that will compete (in the U-20 World Cup)," Deputy Regent of Bogor Iwan Setiawan noted on Saturday. Although they are only prepared as supporting fields for training grounds, the quality of grass, size, and dressing room must meet the standards set by FIFA. In the meantime, three stadiums are already being used as training fields for U-20 World Cup athletes, specifically the outdoor Pakansari Stadium, Mini Persikabo Stadium, and Pajajaran Stadium. With the designation of six main stadiums as the venue for the U-20 World Cup, Indonesia also has to prepare several other supporting stadiums. In accordance with FIFA's requirements, 30 training fields must also be provided, as each of the main stadiums must be supported by five training fields around it. FIFA and Indonesia's Ministry of Youth and Sports have confirmed the six main stadiums to be used for the U-20 World Cup held on May 24-June 12, 2021. The six stadiums are the Gelora Bung Karno Main Stadium in Jakarta, the Pakansari Stadium in Bogor, the Manahan Stadium in Solo, the Mandala Krida Stadium in Yogyakarta, the Gelora Bung Tomo Stadium in Surabaya, and the Kapten I Wayan Dipta Stadium in Bali. (ANTARA)

78 Indonesian Crew Members Being Quarantined in Japan over Coronavirus

Jakarta - Some 78 Indonesian nationals, the Diamond Princess cruise liner’s crew members, are being quarantined in the Yokohama waters, Japan, after some of its passengers were found to have contracted the novel coronavirus (2019-nCoV). The cruise liner, carrying 3,700 passengers and crew members, is currently docking in Yokohama coast. "The Indonesian Embassy in Tokyo has coordinated with local authorities. All Indonesian crew members are in good health," Director of Indonesian Citizens and Legal Entities Protection of the Foreign Ministry Judha Nugraha noted in a short message text on Saturday. The embassy has also established contact with the Indonesian crew members to monitor their condition and provide necessary assistance to them, he stated. In accordance with the health protocol, the quarantine process at the cruise liner will last for 14 days, from February 5, 2020. "The management of the cruise liner has provided logistics as well as free telephone and internet services to enable crew members to communicate with their families," he added. On Friday (Feb 7), some 47 of the cruise liner's passengers were found to have been infected with the coronavirus. They were all moved and isolated at a hospital in Kanagawa Prefecture. The new cases of coronavirus brought the number of confirmed cases of coronavirus in Japan to 61 out of the 273 people suspected of being infected with the virus. (ANTARA)

Indonesia Plans to Set up Special Facility for Contagious Diseases 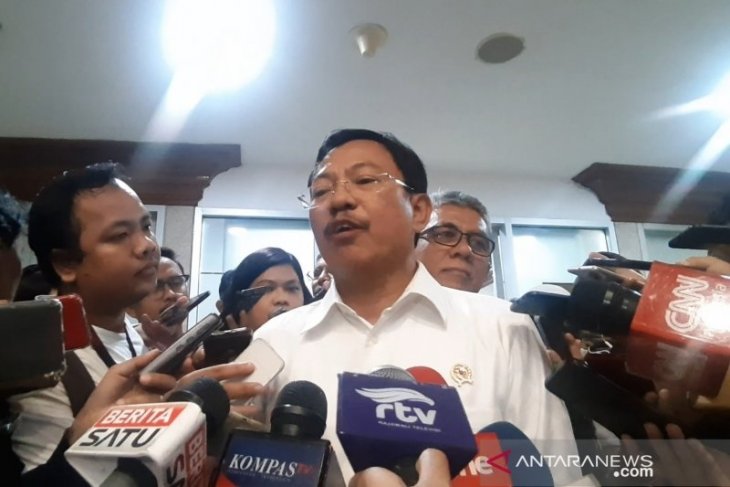 Jakarta - Health Minister Terawan Agus Putranto highlighted the government’s plan to build a special facility to handle contagious diseases as a precautionary measure against an outbreak in the future. "Hence, today's meeting is for brainstorming, collecting data on what's best for the future. Not for now," the minister stated at the Office of the Coordinating Minister for Political, Legal and Security Affairs in Jakarta on Friday. He notified the press that during the meeting, the discussion centered on a particular place or island to host the planned facility to treat infectious diseases, such as the coronavirus. He denied any rumor that the facility was required since the coronavirus outbreak would go on for a long time. "No, it will not last long. When the climate changes, it will also change," he stated. At least 100 islands have been mapped out as possible sites, but the meeting did not make a decision since it was the first of its kind held to discuss the matter, he remarked. "Today, we spoke and discussed inputs for the coordinating minister later. We did not take any decision," he stated. The former head of the Gatot Soebroto Jakarta Army Hospital stated that all aspects were taken into account in connection with preparations for the special facility. "We studied all aspects pertaining to biology, politics, economy, defense, and security. All were reviewed. Hence, it was just brainstorming," he stated following the meeting. Coordinating Minister for Political, Legal and Security Affairs Mahfud MD had earlier chaired a meeting to discuss preparations to find an island or special place where a special facility will be built for infectious disease treatment. The meeting was attended by several ministers and related officials, including Minister of Health Terawan Agus Putranto, Head of the National Disaster Mitigation Agency (BNPB) Doni Munardo, and Head of the Indonesian Defense Forces' Health Center Major General Bambang DH. Mahfud expounded that the meeting was a follow-up to President Joko Widodo's directives on the likelihood of building a specific place to exclusively treat and control infectious diseases, such as coronavirus. "On February 4, the president gave directives to mull over the possibility of building a certain place that is exclusive and used as a hospital to cope with infectious diseases, such as coronavirus and SARS," he added. (ANTARA)