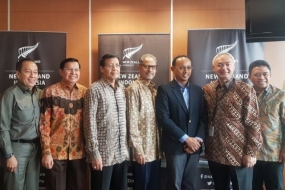 Cooperation between Indonesia and New Zealand, especially relations between the people of both nations, still needs to be further explored, former Indonesian ambassador to New Zealand Amris Hassan stated.

"Many areas can be explored by the younger generation, for instance, the digital industry, as New Zealand is very well-known in this field," Hassan noted during the appointment of the new board of Indonesia-New Zealand Friendship Council in Jakarta on Monday.

Sustainable agriculture, creative economy, advertising, geothermal, and disaster management are also fields that are favored by New Zealand for which cooperation with Indonesia can be forged.

As a country that is equally vulnerable to disasters due to being geographically located in the ring of fire region, Indonesia has gained a lot of knowledge on disaster mitigation from New Zealand.

Indonesia has "borrowed" New Zealand earthquake-resistant building standards since 1975, thereby becoming an example of important cooperation in the field of disaster mitigation.

"New Zealand is very capable of managing disasters through the development of technology," Hassan, who recently handed over the chairmanship of the Indonesia-New Zealand Friendship Council to Indradi Soemardjan, noted.

Under the new management, Hassan expressed hope that the organizational role, formed since the past eight years, will further strengthen relations and cooperation between the people of Indonesia and New Zealand through rejuvenation of the vision and mission, as well as younger members.

"There is still a lot of space for cooperation that needs to be filled both at the government and non-formal levels. This organization can bridge the gap," he stated.

Chairman of the Indonesia-New Zealand Friendship Council Indradi Soemardjan said he will work to encourage cooperation between the two countries in various fields, ranging from agriculture to technology.

In fact, he is ready to welcome a New Zealand startup delegation next week that will study the course of startup businesses in the country.

"They want to see how Indonesia manages our startup. Later, they will also visit the Go-Jek office," Soemardjan stated.

Soemardjan is a senior executive, who is active and enjoys sound relations with the business community in the ASEAN and New Zealand.

In addition to serving as director of PT Javanero and treasurer for the Sustainable Coffee Platform of Indonesia, he is also on the Global Advisory Board of Agrea LEAF of the Philippines and the New Zealand Institute Advisory Group at the University of Auckland. Soemardjan was selected as a participant in the ASEAN Young Business Leader Innitiative in 2014, a program funded by New Zealand.

New Zealand Ambassador to Indonesia Trevor Matheson praised the leadership and contributions of Hassan during his eight-year tenure as chairman of the council and welcomed the appointment of Soemardjan to carry forward the role of Hassan.

"The appointment of a new chairman is a good opportunity for the business sector to engage more deeply," Ambassador Matheson noted.

The Indonesia-New Zealand Friendship Council has helped establish cooperation between private companies and promote business interests between the two countries. The New Zealand Embassy is optimistic of working more closely with the council to improve bilateral trade and investment relations.

The bilateral relations between Indonesia and New Zealand have been upgraded to the level of comprehensive partnership, which was agreed upon during the visit of Indonesian President Joko Widodo to Wellington and at the meeting with New Zealand Prime Minister Jacinda Ardern in March 2018. (ANTARA) 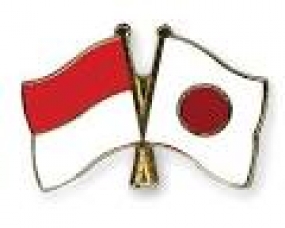 The Japanese government conferred the star of service 2018 awards to two figures in East Java for their contribution as a friendship link for years between Japan and Indonesia, especially East Java and Japan.

According to him, Okano had actively participated in various East Java Japan Club (EJJC) activities since he first lived in the city of Surabaya in 1988.

In addition, he was also involved in various activities that emphasized the importance of interaction and harmonization between the Japanese community and the local community in Indonesia, he added.

"He also has played a big role in improving education facilities for Japanese children in Surabaya," he remarked.

In recognition of Okano`s dedication to the welfare of the Japanese community in East Java, he was awarded the star of service "The Order of the Rising Sun, Gold and Silver Ray."

Overall, he has supported the duties of the Japanese Consulate General in Surabaya for more than 40 years. In recognition of his contribution and dedication to Japanese diplomatic activities, he was awarded the star of service "The Order of the Sacred Treasure, Gold Rays with Neck Ribbon."

The Japanese Ministry of Foreign Affairs (Ministry of Foreign Affairs) also gave awards to 16 leaders and four organizations in Indonesia. Of the 16 figures, there were three figures in East Java, namely the Deputy Chairperson of Trustees, East Java Japan Club, Joshie Halim, for having been instrumental in designing the construction of the Surabaya Japanese School (SJS) for four years.

In addition, the award was also given to the Vice Chancellor for Planning and Cooperation of Surabaya State University, Prof. Dr. Djodjok Soepardjo. Soepardjo is known as a pioneer in Japanese Language research in East Java that has contributed to disseminating and developing Japanese language education in East Java. The next award was given to deceased Mrs. Tomiko Oetoro for her services during her life in the East Java Japanese Association (PJJT) or what is now better known as "East Java Japan" Club (EJJC). (ANTARA) 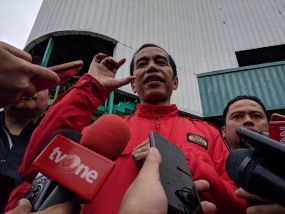 Indonesian President Joko Widodo reminds the village fund provided by the government for the people to be used effectively. It was remarked by President when attending a socialization on the 2019 Village Fund’s Usage Priority and Evaluation of Banten Province Development Policy and Rural Empowerment, in Tangerang, on Sunday (11/4). On the occasion, President encouraged village apparatus and all parties to cooperate in a bid to ensure the effectiveness of village fund. Besides being used for building infrastructure, village fund can also be utilized to establish people’s economy.

“To village apparatus and all related parties, let’s supervise the use of village fund, so that it can be used effectively and provide benefits for our society especially for village society. The application of village fund has attracted other countries to implement the program. The World Bank told that a number of countries would like to apply the village fund program. They would like to know how it is applied, transferred, and used. Therefore, in the future, we hope village fund can be used not only to develop infrastructures, but also to empower rural economy and support village’s innovations,” said Joko Widodo.

Furthermore, President Joko Widodo pointed out that the village fund program has been allocated since 2015 and it has successfully repressed the number of poverty and stunting cases in society. Meanwhile, Indonesian Villages, Disadvantaged Regions, and Transmigration Minister, Eko Putro Sanjoyo told that the government successfully disbursed more than 99% of the total village fund to society in 2018. According to him, the achievement reflects the better management of village fund and the progress of rural development. (VOI/Ndy/Trs: Amanda/DP) 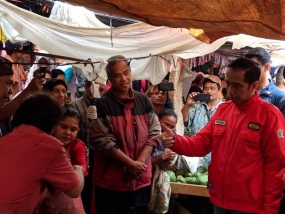 Indonesian President, Joko Widodo said that the government is responsible for maintaining the stability of basic commodity prices in the market. According to President Joko Widodo, the government must be able to keep the balance between the profits of the merchants and the affordability of people to purchase the commodities in the market. The President remarked that currently Indonesia’s inflation is low. Therefore commodity prices in the market are not supposed to increase significantly.

“The Government is responsible for maintaining the stability of commodity prices. We have to ensure how people can afford the commodities and farmers can also get their profit. It is not easy to maintain their balance. I bought numerous commodities. I checked their prices and bought them. I want to prove that the prices are stable because our inflation level is below 3.5, meaning commodity prices are stable,” said Joko Widodo when speaking before santris (Islamic boarding school students) and public at Darul Hikmah Islamic Boarding School, Pamulang, Banten on Sunday (11/4) .

In addition, President Joko Widodo hopes there will be no sides spreading issues on hiking prices in the market to the public as it is a misleading thing and it will impact the stability in the society.

“We must not believe the misleading information. It is a normal thing if some prices are hiking because commodity prices are fluctuationg. Therefore, we must not let such issues disrupt the stability of the society,” said Joko Widodo.

President Joko Widodo told that he had observed commodity prices twice in different regions, so that he could clarify the issue regarding the increase of commodity prices in the market. On the other hand, President admitted, he did not find any significant hike in the markets he had visited. (VOI/NDY/Trs:Amanda/AHM)