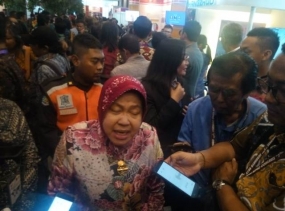 Before the participants of the Regional Governments Meeting of the Asia Pacific Region, United Cities and Local Governments Asia-Pacific (UCLG Aspac) in Surabaya, Thursday, 13 September, 2018, Surabaya Mayor Tri Rismaharini conveyed the city government's efforts to address climate change. According to Risma, Surabaya municipality government, among others, built parks and urban forests. Risma admitted that every year she builds 10-20 parks at various corners of Surabaya. In addition, the city government also builds 2 urban forest locations and 10-15 sports fields. According to Risma, all of these are forms of innovation development in accordance with the global context.

“From UCLG, Europe also said that they already knew about what had been done in Surabaya. But we can't just know this, but we really have to do it to make Surabaya safe, because Surabaya is only five meters above sea level,” said Tri Rismaharini.

Meanwhile, Pablo Gandara, Manager of the International Urban Cooperation (IUC) Asia, said there are many targets to be realized together with the world countries to deal with climate change, including how to reduce the energy consumption in Asia by 27 percent in 2030. The United Cities and Local Governments Asia Pacific Congress is held from 12 to 15 September 2018. (VOI/Beny/Marno/trs Rezha/AHM) 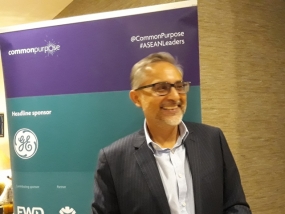 British Ambassador to Indonesia and Timor Leste Moazzam Malik said that his side would continue to strive to strengthen cooperation between Britain and ASEAN, including Indonesia as the largest country in the region. Therefore Moazzam Malik invited young Southeast Asian leaders to discuss in the UK-ASEAN Leadership program which took place in Jakarta recently. Before discussing with Moazzam Malik the young leaders held meetings with a number of parties in Jakarta and learned how to develop smart cities. During the discussion, Moazzam Malik told the media crew that the young leaders were learning about the role of technology to realize a smart city that could improve the quality of life and the welfare of its people.

“So, it is group of people from all of the 10 ASEAN countries. They spend the day together in conference. They spending three days now doing various discussions with various Indonesian actors, you know with banks, with NGOs, think-thanks. The end of the week they will come together and the theme as you know is around the smart cities, to understand how technology can be used to connect us, citizens with services and to improve quality of life and improve welfare and well-being. So, it is very important challenge because the future of the Asian region is increasingly urban and so far the urban area to succeed. We have got technology to raise the living standard,” said Moazzam Malik.

Moazam Malik further said, to realize a smart city needs concrete cooperation among cities in the world to know and learn the increasingly complex challenges and problems of the city. He then gave an example of the cooperation carried out by Surabaya city in East Java with Liverpool, England. The collaboration carried out by the two cities includes the development of creative economy, port management, smart city development, and capacity building of human resources (HR). According to Moazzam Malik, Surabaya learned a lot and learned lessons from the experience of Liverpool using technology in managing traffic, disasters, and ports. (VOI/Rezha/AHM) 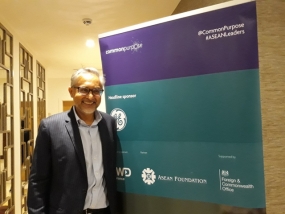 British Ambassador to Indonesia and Timor Leste Moazzam Malik said the Southeast Asian region or ASEAN is the engine for the world’s economy in the 21st century. The reason is that last year, the economic growth in the region was around 5.2 percent. Therefore, the United Kingdom (UK) wants relationship with ASEAN, a community that houses countries in the Southeast Asia region, can be deepened. During the recent UK-ASEAN Leadership meeting in Jakarta, Moazzam Malik said the future of the economy was not only talking about India and China but also ASEAN.

“So, the ASEAN is a very important region for the future of world economy. And If the ASEAN comes together and succeeds, then Indonesia got succeeded. The future of the world economy will depend not only on India and China, but also on the ASEAN and Indonesia. So for the UK, we see Indonesia and the ASEAN as really one of the engines of the global economy over the 21st century, Moazzam Malik said.

Furthermore Moazzam Malik believes that ASEAN's economic potential in the future is based on several elements, including the population, which is very large, and the level of economic growth, which is good. Therefore, to strengthen cooperation between the UK and ASEAN, Moazzam invited young Southeast Asian leaders to discuss in the UK-ASEAN Leadership program. The UK-ASEAN Leadership Program is one of the activities carried out by the British Government in collaboration with an international non-profit organization from Singapore, Common Purpose to produce cross-border leaders. (VOI/Rezha/AHM) 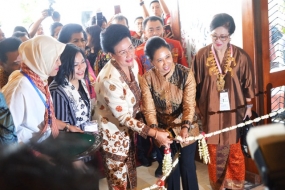 Minister of SOEs Encourages Women Role and Empowerment in Indonesia

Indonesian Minister of State-Owned Enterprises (SOEs) Rini Soemarno delivered her remarks before the participants of the 35th United Nations - International Council of Women (UN-ICW) General Assembly and the National Gatherings of Thousand Indonesian women's organization in Yogyakarta, Thursday, September 13th, 2018. On this occasion, Rini mentioned that women are the supporters of various development programs in Indonesia, including in SOEs as one of the national development agencies. Rini stated that her side would continue to provide space for women with their achievements to contribute to SOEs. Therefore, he wants women to occupy important positions such as directors in each SOEs.

“We also see and target female talents and encourage them. We also encourage that in each company there is also a representation of women. Of course the directors, I hope there is at least one woman among them,” Rini Soemarno said.

Furthermore, in addition to providing space for women to contribute in SOEs, Rini said that her ministry also encouraged various SOEs programs that had been implemented aiming at improving women's ability, especially in the business sector. The program includes community business credit (KUR), SOEs Creative House, and Fostering a Prosperous Family Economy (Mekaar). The series of t the 35th United Nations - International Council of Women (UN-ICW) General Assembly began with the ICW Board of Directors Meeting on 11-12 September 2018, the opening of the 35th ICW General Session on 13 September 2018, the National Meeting of Thousand Women's Organization on September 13-14 2018. (VOI/Rezha/AHM)